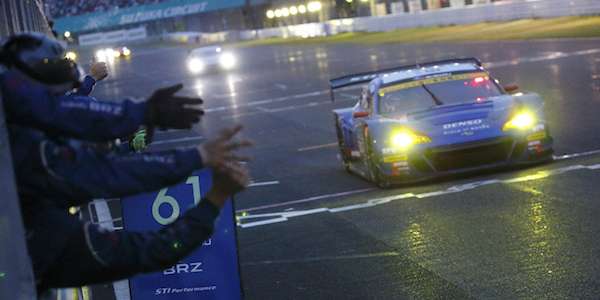 The 2016 Subaru BRZ GT300 gets its first win of the season. The team overcame a lot to get the victory.
Advertisement

It took six rounds, but the Subaru BRZ GT300 and the Subaru Tecnica International (STI) team gets its first victory of the SUPER GT season. The BRZ had the fourth fastest qualifying time to start the Suzuka 1000km race, and continues the success after finishing third in the last two races.

The rain this weekend kept the track slick as storms moved through the area. But it didn’t keep the drivers from pushing the Subaru BRZ hard from the fourth spot and moving up to first place. Yamauchi was behind the wheel to start the race and moved up two spots to second before the first pit stop after 25 laps. The team refueled the car, replaced the tires and finished the driver change.

A collision changes everything

But Iguchi spun out after a rear-end collision in the first lap out. Although there was no damage to the BRZ, Iguchi dropped all the way to 20th place. The driver remained focused on catching up and moved all the way up to sixth place before the car was brought back for another pit stop.

In order to catch the leaders, the STI team decided to change their strategy and only replace the rear tires so they could save valuable time. With the reduction in time, and the drivers pushing the BRZ hard, they moved up to third place after 80 laps. The rain and more accidents cause the safety car to come out slowing the race to a crawl.

The rivals brought their cars in one after another for the final pit stop after the race resumed. Again, the team used the same strategy, only replacing the rear tires on the fourth pit stop and took to the track again. The two drivers swapped again and Iguchi returned to the front still in third place. With the rain continuing to come down, Iguchi moved up and overtook the leaders and the STI team successfully led the #61 Subaru BRZ GT300 to the finish line, achieving the season's first victory.

The 2016 Subaru BRZ GT300 team now has two back-to-back third place finishes and a win at the Suzuka 1000km. The next race in the SUPER GT Round 7, will be held at Chang International Circuit (Thailand) October 8-9.