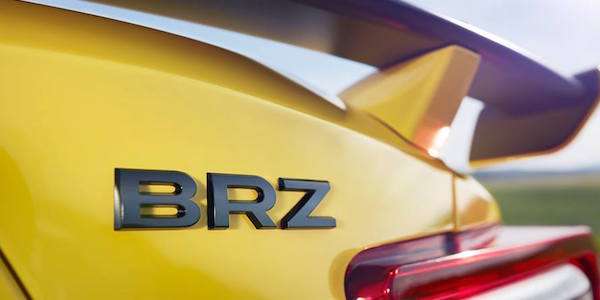 Subaru and STI are bringing a surprise 2017 BRZ to Wicked Big Meet. What is STI up to?
Advertisement

The 2017 Subaru BRZ has just been announced and it’s coming with new upgrades. Subaru Tecnica International (STI) is bringing a surprise BRZ to the Wicked Big Meet on June 12. What will the new BRZ sports coupe be getting? It will likely be an STI-enhanced special edition model.

On their Facebook page, Subaru announced a few days ago they are bringing “something new” to the Subaru gathering in Stafford Springs, CT. They teased the picture above and said Subaru enthusiasts at WBW will see it first. It’s the largest Subaru enthusiast festival in America and it takes place at Stafford Motor Speedway in June.

STI is behind the special BRZ

The special BRZ will be coming from Subaru Tecnica International (STI) who will also be at Wicked Big Meet and Big Northwest on June 25. The new BRZ could be an STI-enhanced model which Subaru will introduce as a BRZ special edition. We already know it will come in Sunrise Yellow which Subaru has used on the Crosstrek special edition. It will have more than a special color.

It will likely get the new 2017 BRZ Performance Package that includes Brembo calipers and larger rotors on both front and rear brakes for better stopping power. Subaru says the advanced braking system gives BRZ a significant boost in stopping power, fade resistance, and pedal feel. The package also includes SACHS Performance shock absorbers on all four corners for improved ride and corning stability. Also included in the package are special 17-in x 7.5-in black aluminum alloy wheels.

STI is bringing more than the new Sunrise Yellow 2017 BRZ. They will bring a showcase of vehicles for Wicked Big Meet fans. They will also bring the exclusive JDM only WRX STI S207. This is a WRX STI with the 2.0-liter 328hp boxer U.S. fans want to see brought here. STI also brings rally legend Colin McRae's Impreza WRC98, and a 1998 Impreza 22B. Subaru enthusiasts at Wicked Big Meet will get to see what STI is up to on June 12.