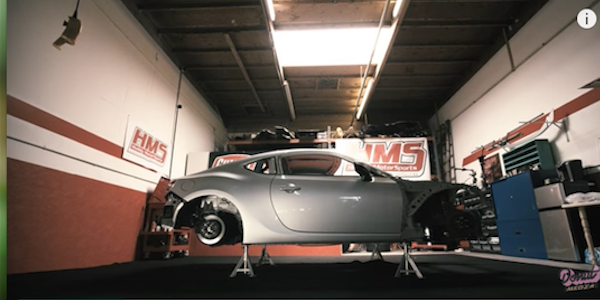 Why is Drifting pro, Ryan Tuerck, stuffing a Ferrari 458 V8 into a Toyota 86 coupe?
Advertisement

What happens when you put a Ferrari V8 engine into a Toyota 86? You get a Toyota 86/Ferrari supercar. Drifting pro, Ryan Tuerck, is trying to make it happen. Tuerck's Toyota 86 will be a one-off build, turning the Toyabaru into a monster supercar. Ryan has plenty of experience in the Scion FR-S he competes with in the U.S. Formula Drift series. Now he wants to turn the Subaru/Toyota creation into a JDM+Italian Supercar.

Toyota and Subaru never thought of this

The two automakers never had this in mind when they brought the BRZ/FRS/GT86 to the global market. In its newest stock form the 2017 Subaru BRZ/Toyota 86 produces 205hp from the Subaru four-cylinder boxer. Add two more cylinders and will be a monster on the track. Scroll down to page 2 to see the video clip.

The video below, shows a Ferrari F136 V-8 being shoehorned into the sports coupe, to see what happens when you "combine the best of Japan and Italy." We can just imagine what this one-of-a-kind Toyota 86 supercar will be like when they finish the project.

The new Subaru BRZ/ Toyota 86 is already a great driver’s car that is high on the fun-to-drive meter. It’s very affordable (under $26,000) and has the driving dynamics of a sports car twice its price. Can you imagine what this rear-drive sports coupe will be like with a 597hp Ferrari V8 stuffed under the hood?

The Ferrari V8 in its stock form pumps out 597 hp in Ferrari's latest 458 Special. This engine has been highly decorated as one of Ferrari’s best engines. In 2011, it was voted the Best Performance Engine and Best Engine Above 4-liters of the year in the prestigious 2011 International Engine of the Year Awards. Now it makes its way into the Japan coupe.

Go to Page 2 for the video: What are Tuerck’s plans for the new Toyota 86 supercar?

It’s a good choice if you are going to give the Toyota 86 a major engine upgrade. What are Tuerck’s plans for the new Toyota 86 supercar? He isn’t revealing what he has in mind for the Ferrari transplant.

Check out the video below and stay tuned for more information when it becomes available.