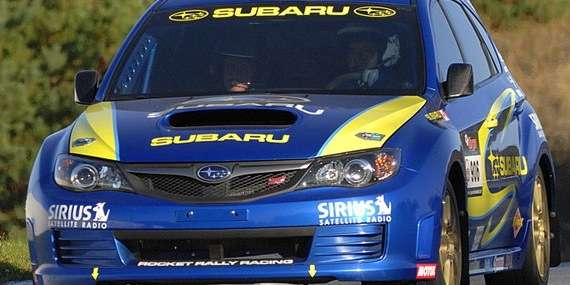 Subaru Canada has a long history in Rally racing and established a strong presence in the Canadian circuit since 1992. Subaru has become a dominant force in rallying and Subaru Canada has strengthened their commitment to Canadian motorsports with their three-year partnership with Patrick Richard and Rocket Rally Racing. Rocket Rally Racing will custom build two all-new 2015 Subaru WRX STIs for the upcoming Canadian Rally Championship (CRC) season.

Why should the average person who is not interested in motorsports be concerned about Subaru’s racing interest? Rally racing is the perfect arena for Subaru to develop and refine its core technologies in the pursuit of further developing the Subaru Symmetrical full-time All-Wheel Drive system. The lessons learned through Subaru's extensive rally heritage are evident in their entire lineup of vehicles, including the rally-bred WRX and WRX STI.

The SRTC team is led by driver Patrick Richard and co-driver Nathalie Richard while the purebred rally competition cars are maintained by a talented service team. Subaru's success in the Canadian rally scene is due, to a joint venture with Richard's very own shop, Rocket Rally Racing in Squamish, British Columbia. Thanks to the partnership, Subaru will compete with two completely custom 2015 Subaru WRX STI race cars.

The two new custom built all-new 2015 WRX STIs will be raced at the six annual events, as well as used at other special events and public displays. Ted Lalka, Vice President of Product Planning and Marketing, Subaru Canada, Inc.said, "It’s an honor to solidify having four time Canadian rally champion Patrick Richard at the helm of our Subaru Rally Team Canada. Richard brings a wealth of knowledge in both building sound rally vehicles and being behind the wheel of them, giving us confidence at each and every event we participate in."

Patrick Richard and Rocket Rally Racing will be working hard over the next few months to hopefully have the new 2015 WRX STI fully prepared for Rallye Baie Des Chaleurs in June. The event will take place in New Richmond, QC, June 28- 29. Subaru Rally Team Canada placed second at Rallye Perce-Neige, the first event of six through the championship, which was held in February. The team is excited for the five remaining events this season and can hardly wait to try the all-new 2015 Subaru WRX STI on the grueling stages.

Watch Side Cam - Choose Your Own Angle - Subaru WRX - Rally of the Tall Pines video.