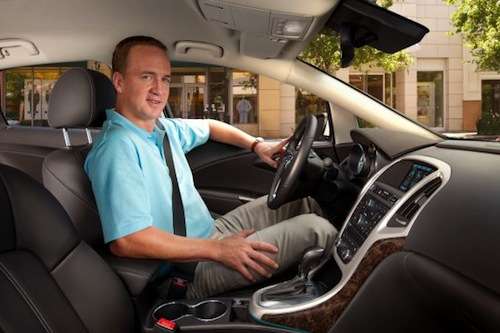 Peyton Manning is one of the highest paid quarterbacks in the NFL and needs to be protected from being blindsided. Does the 2013 Buick Verano really keep him safe?
Advertisement

The star quarterback of the Denver Broncos came back from what should have been a career-ending neck injury. But after four neck surgeries and intensive rehab, Peyton Manning came very close to going to the Super Bowl last year. It was an incredible comeback story for the future Hall of Fame quarterback. With a 20 million a year salary and his NFL fame, why does Peyton Manning hang out with the guys at Buick when he could be endorsing Mercedes-Benz or Ferrari for that matter?

Because it’s who Peyton Manning is. He's not a playboy like the quarterback of the New England Patriots, Tom Brady. Peyton Manning is a down-to-earth guy who has a family and chose to play in Denver because its a great place to raise his family. While other NFL quarterbacks are jet-setting around the globe with supermodels, Manning is at home playing with his kids. This is just the kind of car that Manning would endorse because it reflects who he is. You have to respect him for the kind of person he is as he could be driving the most expensive luxury car on the planet.

Last year, we saw Peyton Manning in his Buick Verano giving audibles to the luxury car from GM and asking it to give directions in a construction zone. This season, he returns in a Buick commercial callled “Blindsided” touting the 2013 Verano’s safety features. Peyton Manning returns to TV screens across the country during this weekend’s NCAA Men’s Basketball Final Four.

In the video clip below, Manning talks about why he chose the Buick Verano to protect his backside. “We’re talking about the new Verano but using important football lingo. Last year we were calling audibles and this year it’s a spot called ‘Blindsided,’” said Manning. “No one wants to be blindsided, especially a quarterback. Usually you have one guy protecting the blindside but these features are so good, it’s really like having 11 guys blocking your blindside.”

The 2013 Verano features a standard Rear Vision Camera and an available safety package that includes Side Blind Zone Alert and Rear Cross Traffic Alert. These two technologies share a set of radar sensors hidden in the corners of the rear bumper that can help drivers avoid crashes when changing lanes or backing. In the commercial, the new Verano keeps Manning from being hit by a UPS truck that is barreling down the street.

Rear Cross Traffic Alert senses cross traffic up to 65 feet away that may not be visible to the driver when backing out of a parking space or driveway. The driver is alerted with a red directional arrow displayed on the Rear Vision Camera screen along with three directional beeps. The Verano keeps the Broncos quarterback safe as he backs out of the driveway.

Peyton Manning is an NFL player that's just an average guy. He could endorse a much more sexy product, but chooses to work with Buick. “Peyton Manning is approachable, and that’s synonymous with what Buick is, an approachable, down-to-earth luxury brand,” said Tony DiSalle, vice president of Buick Marketing. “And while he’s certainly elevated and premium in terms of his position in the NFL, he’s easy to relate to and likeable.”

Watch the new Buick commercial this weekend as Peyton Manning almost gets blindsided by what looks like a UPS truck. The 2013 Buick Verano keeps the star quarterback safe as he gets ready for his second season with the Denver Broncos.