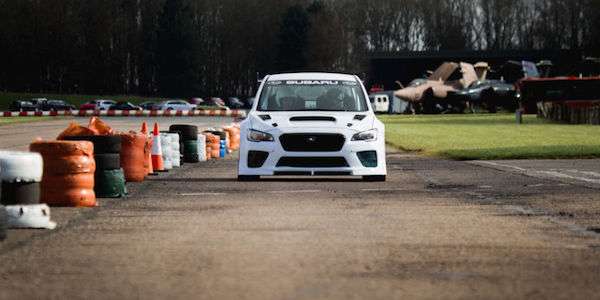 Is a new 2016 Subaru WRX STI being built to break the 2014 Isle of Man record?
Advertisement

Subaru on their Facebook page says “this is not a April Fools’ joke.” They put a link to a story from Road and Track on April 1. The R&T story tells about a new Subaru WRX STI that will attempt to break the 2015 WRX STI’s Isle of Man record run set by Mark Higgins in 2014.

Road and Track reports Subaru Tecnica International (STI), the motorsports and performance division for Subaru, has teamed up with Prodrive. This is the same motorsport business known for its 19 year association with Subaru. It looks like they are partnering again to destroy the Isle of Man record set by Higgins in the new-generation 2015 Subaru WRX STI. There aren’t many details other than the car is all white, it’s got new aerodynamic body panels a modified hood and larger wing on the back.

In case you haven’t heard of Prodrive, the most iconic moment in the company’s history was Colin McRae’s victory on the RAC Rally in 1995 driving a Subaru Impreza, making him Britain’s first World Rally champion and bringing Subaru the first of three consecutive manufacturers' titles. Prodrive brought further WRC titles for Subaru in 2001 (Richard Burns) and in 2003 (Petter Solberg).

In June 2014, Mark Higgins broke his own 2011 Isle of Man record in the 2015 WRX STI. Higgins drove a U.S. spec STI and broke his lap record of the fabled 37-mile course with an average lap speed of 117.510 and a time of 19 minutes and 15 seconds. There were only minor modifications made to the production WRX STI.

That STI was fitted with a FIA-spec roll-cage, racing seat and harness, fire suppression system and modified springs and dampers to handle the sustained high speeds and changing conditions of the course. The 2015 STI was shod with Dunlop Derezza tires and received a high decibel straight exhaust for crowd safety. The speed limiter was also removed from the car.

Prodrive, headquartered in Banbury England, reportedly has teamed up with STI to build a WRX STI just for demolishing the lap record again. Details on the new 2016 Subaru WRX STI Isle of Man killer will be released soon. STI enthusiasts may see another record set this year. Stay tuned.