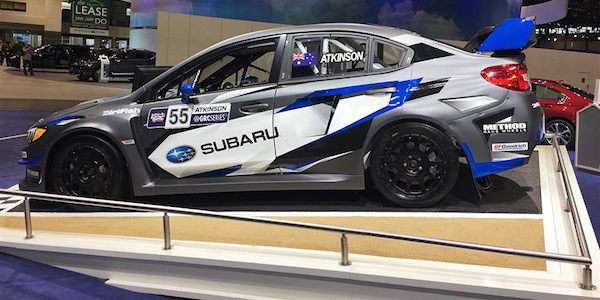 The 2017 Red Bull Global Rallycross season will see Subaru run two new WRX STI Supercars and two new drivers for all 12 rounds. Last year was a rebuild season for Subaru Rally Team USA (SRTUSA). They needed to figure out how to catch Tanner Foust and Scott Speed. They only competed in a few select rounds, and did extensive testing on a number of STI’s, with many different drivers. Subaru thinks they can compete with the pair of Andretti VW Beetles.

Subaru brought Atkinson’s #55 WRX STI GRC Supercar to the 2017 Chicago Auto Show to reveal the new livery for 2017. The Global Rallycross car has been extensively redesigned and tested by Vermont SportsCar and Subaru Tecnica International.

Under the hood of the WRX STI Supercar is a 2.0-liter turbocharged boxer engine producing close to 600hp. It will launch off the starting line from 0-60 mph in just 2 seconds. The GRC races are grueling, and the cars need to withstand continual contact with the competition, literally fly in the air on 70-foot jumps, and deal with mixed surface (gravel/tarmac) tracks.

Red Bull Global Rallycross announced the race schedule for 2017, and Subaru will compete for podiums and the manufactures championship by running both cars in all 12 rounds. Here’s the expanded race schedule that includes new cities and will also include Canada for the first time.

Subaru isn’t making any predictions, but they think they can now compete for a driver and manufacturer’s championship in 2017 with the new Subaru WRX STI Supercars and two new drivers. They have a steep hill to climb to compete with Foust and Speed in the Andretti Volkswagen Beetles. The season starts in two months. Stay tuned.