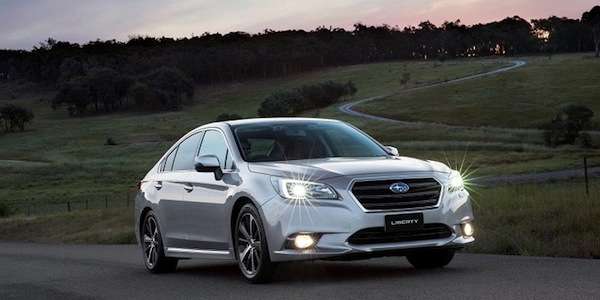 The new 2015 Subaru Liberty (Legacy) launches in Australia and will be $14,000 cheaper than the outgoing model. But it’s bad news for previous generation owners.
Advertisement

The all-new 2015 Subaru Liberty (Legacy in the U.S.) launches in tandem with the new Outback and gets a massive price drop in Australia. As Liberty celebrates its 25th anniversary, Australians get to celebrate its dealer launch with a big price cut by as much as $14,000. The new sedan will offer more for less. But previous generation owners won’t be happy.

Why the big drop in price?

Subaru says the price cuts are due to more favorable currency exchange rates with Japan. In an interview with Motoring.au Subaru Australia Managing Director, Nick Senior, says, "Currency is always going to have the biggest impact on imported goods. It is clear that the Yen-Australian dollar equation has moved into a more favorable range for us."

DON'T MISS: Australia gets 2015 Outback diesel and huge price drop but not in the U.S.

All new Liberty models are more efficient with the 2.5-liter variants having reduced fuel consumption by 7.6 percent in the combined cycle and emissions by 8.2 per cent, while 3.6-liter variants are 3.9 percent more efficient in the combined cycle and have 5.0 percent lower emissions. Fuel efficiency is also aided by a 10 percent improvement in aerodynamic performance.

Current Liberty and Outback owners who purchased the previous generation model with less features at the higher prices, can expect to see reductions in resale values as the new models reach Subaru showrooms. When Motoring.au asked Nick Senior if the previous generation models were too expensive, Senior responded, "There's various factors that are now in play that weren't in play then. We're taking the opportunity." He went on to say, “The chance to reposition the vehicles was too good an opportunity to ignore.”

For buyers who waited for the new-generation 2015 Subaru Liberty and Outback models, they will be rewarded with a massive drop in price. But this won't be of much comfort to owners who have previously forked over significantly more cash for their previous generation models that are less sophisticated with fewer features.

LG's New EV Battery Plant Is a Welcome News for Tesla
Tesla Giga Berlin's New Hurdle: It's Not Only the Gov't, but Now Tesla Itself
END_OF_DOCUMENT_TOKEN_TO_BE_REPLACED