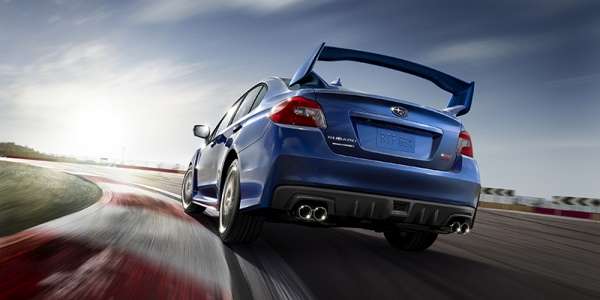 Is the new 2015 Subaru WRX STI too refined for performance fans?

The all-new 2015 Subaru WRX STI arrives with a new upgraded interior. Do performance fans want all these new refinements?
Advertisement

Subaru has said from the beginning that the new WRX and WRX STI would appeal to a wider audience. They want to expand the offering to a new buyer who wants a level of performance but also wants the refinement to go with it. The new STI will definitely be coming with better performance and its going to be faster. But what's going on inside the cabin?

More room in the cabin

It will feature a one-inch longer wheelbase than the outgoing model and that will be a good thing. It will provide a roomier cabin. I don’t thing performance fans will have a problem with that. The windshield is more raked than before, with the A-pillar pulled forward nearly eight inches at the base for better forward visibility. This will give better visibility on the street and track and this will also be a good thing for race fans.

New whiplash-reducing performance-design front seats with height and tilt-adjustable head restraints should also be a welcome addition. STI will have lower side sills and wider-opening doors that will make ingress/egress easier, and rear seat legroom is increased by nearly two inches. Trunk capacity is now 12 cu. ft., up from 11.3 cu. ft. in the previous WRX STI sedan. Of course there is no hatchback STI which is a sore spot for many fans. The sedan is somewhat versatile with the 60/40-split fold-down rear seat and pass through to the trunk to carry additional racing gear.

The driving enthusiast should like the new flat-bottom, leather-wrapped tilt/telescoping steering wheel. This will make it easier for taller drivers to get in and out and find the perfect driving position. The new steering wheel also integrates switches for audio and Bluetooth control helping to keep eyes on the road. I don’t think fans will have a problem with the new STI Design electroluminescent gauge panel. It features a new 3.5-in. central LCD screen that displays various functions, including low-level warnings for oil and windshield washer fluid and the selected gear.

STI also comes with a new multi-information central display with 4.3-in. LCD screen that provides a multitude of vehicle system functions, including a standard rear camera display, boost gauge display, audio, Bluetooth and climate control settings, and a VDC screen showing traction control operation. The display can also provide a vehicle self-check and maintenance reminder. All this should make life easier for the race fan.

A new level of refinement

But will performance fans need or want the new level of refinements? The new 2015 STI now comes with new soft-touch materials for the dashboard, door trim and center console armrest. It will also be available with a new Welcome Lighting that responds to the driver as you are approaching the car. Will race enthusiasts be excited about standard heated front seats, heated exterior mirrors and windshield wiper de-icer? Most fans will be using their STI as a daily driver and will likely be using these in the winter months.

For those who don’t need the navigation package with 6.1-inch LCD screen, voice controls, leather seats, 8-way power driver’s seat, harman/kardon premium audio system and power moonroof don’t need to order the more expensive WRX STI Limited model. But a new wider audience who won't be taking their STI to the track will likely be looking for these premium upgrades.

Overall, it looks like true performance enthusiasts should like the added refinements to the newly-designed 2015 Subaru WRX STI cabin. They will make the STI a better driver’s car on the road and track. Come back tomorrow and we’ll see if the new 2015 STI will be a better performer on the track.