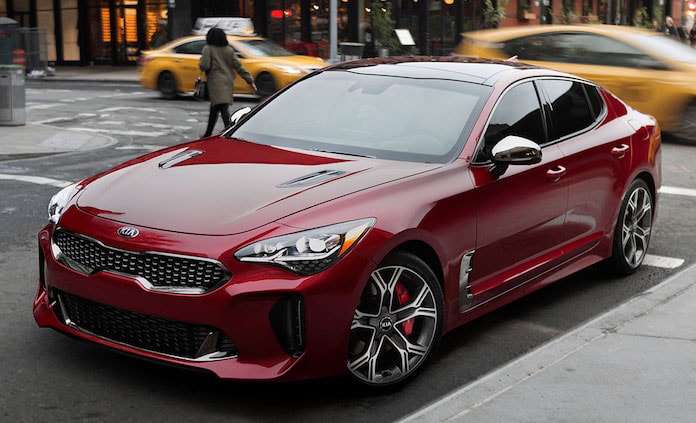 Kia knows they have a hot new model and dealers are already jacking up the price on the new Stinger. The "Naughty Kia Dealers List” will keep you from overpaying.
Advertisement

Kia is known for their compact cars that are affordable for most buyers, but a new model is changing all that. The all-new 2018 Kia Stinger is a hot new production Sport Utility Sedan designed in Frankfurt, and developed on the Nurburgring to produce Kia’s highest-performance production vehicle in the company’s history. It’s already a big hit with performance enthusiasts and some Kia dealers are taking advantage of it.

A report from Car Buzz says some Kia dealerships have decided to add markups to the car's price. Performance fans are getting gouged by some dealers and have to pay more than MSRP to get the new Stinger Sport model. Reports say some dealers are jacking up prices by as much as $10,000 over sticker price, and buyers are paying it.

The new Stinger GT launches from 0-60 mph in 4.7 seconds and has a governed top speed of 167 mph. It’s one of the models in high demand and the report says Kia dealerships are struggling to keep the hot new Stinger on their lots. There’s a Kia Stinger forum that has a ADM Dealers a.k.a "Naughty Kia Dealers List” for you to add the dealers name, address and phone number so buyers can avoid doing business with dealers who sell above MSRP. There's also the Kia Stinger Owners Group dealership experience where you can get additional info.

The Kia brand isn’t just about producing small economy cars anymore. The South Korean automaker is moving into new territory with the 2018 Stinger GT performance Sports Fastback. It is already picking up top engine awards and competes with the Audi S5 Sportback, BMW 440i Gran Coupe, and Infiniti Q50. Some dealers are taking advantage of the performance car’s popularity and jacking up prices. The "Naughty Kia Dealers List” will keep you from overpaying.