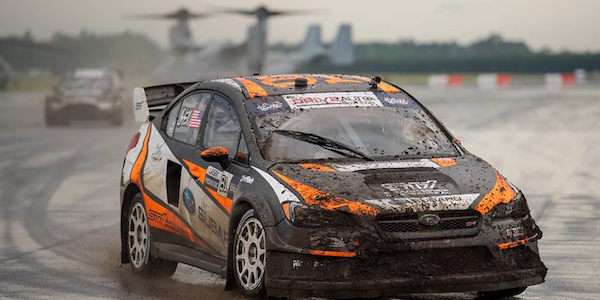 Rain and mud were the story for the 2016 Subaru WRX STI at GRC MCAS. How was Lasek blinded?
Advertisement

It wasn’t the 2016 Subaru WRX STI’s all-wheel-drive system that failed at Red Bull Global Rallycross MCAS this weekend. It was a simple wiper blade that couldn’t keep up with all the mud that did the STI in at the rain-soaked track. Rain fell hard at Marine Corps Air Station New River in Jacksonville, North Carolina. It wasn’t a good holiday weekend for Lasek and Isachsen.

Subaru was using New River Global Rallycross as a test for the 2016 Subaru WRX STIs. Lasek and Isachsen were testing new equipment to see how the upgrades in handling and power are coming along. It was going fairly well until the Final.

Both cars were in the Final

Before the rain started, Bucky Lasek secured a 4th place finish, while teammate Sverre Isachsen was running in 3rd during the first round of heat races on the first day of the double header. Isachsen’s #11 WRX STI encountered a mechanical issue after an impact on the final lap and was forced to stop.

The LCQ saw both Isachsen and Lasek earning spots in the Final finishing in 2nd and 4th respectively. But Isachsen was assessed a 5-second penalty for avoidable contact after hitting a car merging off of the joker lap. The 5-seconds added to his finish position dropped Isachsen from 2nd to 5th in the LCQ and took him out of the Final.

The Final was a muddy mess: Lasek is blinded by the mud

A severe thunder storm hit the area and the 10-car Final was delayed due to heavy rain and lightning. When the skies cleared, track crews scrambled to remove water off the track. But the dirt portions were a muddy mess. Lasek started at the back of the pack and his #81 Subaru WRX STI was coated in mud from the cars slinging the wet clay onto his car’s front end.

The STI’s one wiper couldn’t keep up with the thick mud that had coated the car’s windshield. His visibility was impeded so severely that he was forced to stop after contacting a tire barrier. Lasek said, “I can’t see” as he sat in the car after hitting the barrier. Reining champion Scott Speed won his first race of the season in the VW Beetle with Brian Deegan in second and Steve Arpin rounding out the podium.

The track started out relatively dry for day 2 of the double header. It was another disappointing day for Lasek and Isachsen. Both 2016 Subaru WRX STIs made it into the Semi Finals, but problems with both cars sent them to the pits. In the Semi-Finals, Lasek started in row 3 and went out after experience some kind of mechanical problems. He never was able to keep up and fell behind the leaders. Isachsen also had mechanical problems with his #11 Subaru WRX STI and did not start the race.

The Final had to be cancelled due to another storm that dropped more rain on the track. Race officials shut down the action due to lighting and the ambulance not being able to make it out onto the track. Vermont SportsCar and Subaru Tecnica International (STI) will go back to the shop and sort out what went wrong with both 2016 Subaru WRX STIs. The team is preparing a 2017 Subaru WRX STI Supercar that can compete with Volkswagen and Ford. Stay tuned.