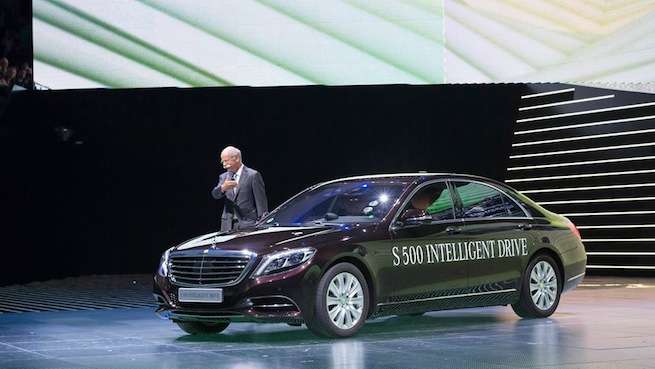 Mercedes S-Class: First vehicle in the world capable of self-driving

A new video just released by Mercedes-Benz shows the new 2014 S-Class being the first vehicle in the world capable of self-driving. If you think autonomous driving is a far fetched idea, Mercedes-Benz will change your mind. On the eve of the Frankfurt Auto Show, Mercedes took a full orchestra and wowed the crowd before they unveiled the new 2014 Mercedes S-Class with S 500 Intelligent Drive.

Two videos below show the reveal before the International show and Mercedes taking the new S-Class for a test of the new Autonomous driving system on the streets in Germany. The S-Class is the first car in the world capable of self-driving. Mercedes recorded the event last month that saw the new luxury saloon drive approximately 60 miles autonomously between Mannheim and Pforzheim in the home country of Germany.

The S-Class prototype retraced the route taken by motoring pioneer Bertha Benz 125 years ago when she set off on the very first long-distance drive. Bertha was the wife of Carl Benz, the patriarch of Mercedes-Benz and the first person to be granted a patent for an automobile.

In heavy traffic, the self-driving S-Class had to deal with a number of highly complex situations from traffic lights, roundabouts, pedestrians, cyclists and trams. Mercedes is the first automaker to be able to drive autonomously in a traffic jam.

Dr. Zetsche who presented the car in Frankfurt said, “The S 500 Intelligent Drive uses sensors that are also available in the production version of the S-Class – just more of them. The car uses these to capture the massive amounts of data in traffic. It’s as if the car is permanently playing speed chess – but in milliseconds and with dozens of opponents at the same time. Because, in traffic, there are significantly more figures in play than would fit onto a chess board.”

Mercedes is on the leading edge of this technology and wants to be the first automaker to put further autonomous driving functions into series production. They have a goal to bring out the technology in a Mercedes-Benz production vehicle by 2020. Zetsche said, “My personal estimate is that we will be driving autonomously in a Mercedes before the end of this decade.”

This will be a challenge as the test drive in Germany had a few glitches along the way. The technician behind the wheel had to take control a few times when the S 500 Intelligent Drive was unable to make the correct driving decision. But Mercedes is the first to complete such a test drive. Mercedes was the first automaker to build a self-propelled automobile and could be the first to produce a self-driving (autonomous) vehicle. The all-new luxury 2014 S-Class is the ideal vehicle to bring out the new technology. Stay tuned to Torque News for the latest Mercedes-Benz news on the S 500 Intelligent Drive.