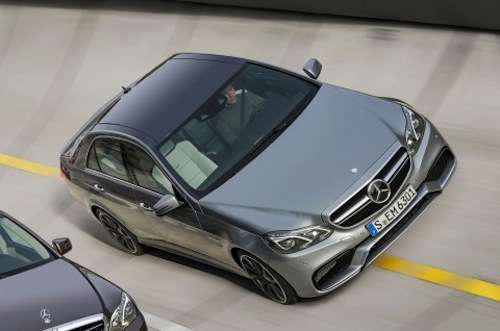 The all-new 2014 Mercedes-Benz E63 AMG will make its world premier in Detroit and has been revealed ahead of the U.S. show.
Advertisement

Mercedes-Benz will launch the completely revised E-Class of cars which includes the 2014 E63 AMG at the International Auto Show in Detroit. The new 2014 Saloon, Estate, Cabriolet and Coupe models have all been completely revised and boast a range of exceptionally efficient engines, new assistance systems and a new design idiom. But the most interest from the U.S. market will come from new 2014 E63 AMG model, now available with a 4MATIC version for the first time.

In an official press release and on their Facebook page, Mercedes has revealed the new E-Class lineup with the E63 AMG and gives us a good look at the new performance sedan ahead of the official reveal at the Detroit Auto Show which takes place on January 14th. The new super sedan is due to get a power upgrade for the current 5.5-liter twin-turbo V8. Reports say the supersaloon will get performance increases to 540 horsepower with 531 lb ft of torque.

In Europe, the 2014 Mercedes E63 AMG will be featured with a rear-drive configuration, but in other global markets including the U.S., the performance sedan will be offered with Mercedes new 4MATIC all-wheel drive version. It will feature a rear-biased 67/33 power split rather than the 55/45 split of standard E-Class models. The 4MATIC system will add about 132 pounds to the new E-Class, but with the additional power upgrade to the E63 AMG, it shouldn’t even notice the weight gain.

Power and performance will be improved and it’s rumored by AutoCar that the new sedan will sprint from 0-60 mph in a very quick 3.5 seconds. They say it’s not been determined if this is from a rear-drive car or the new four-wheel-drive spec model. A Performance Pack will be offered on the new E63 AMG and that could also contribute to the fast sprint times.

If reports are correct, the new E63 AMG equipped with the 4MATIC, could be the quicker off the line and have lower 0-60 mph times than the rear-drive setup. And with the Mercedes-Benz factory Performance Pack, it will have will have an additional 25 bhp and 26 lb ft of torque and raise the top speed from 155 to 186 mph. Too bad we don’t have an Autobahn here in the U.S. to see if it’s true.

New updates inside and out

On the outside, the new 2014 E63 AMG will get some new styling features that include two new single-element lights with integrated LEDs, a new updated E-Class grille and larger front bumper vents with black mesh. There will be 'V8 Biturbo' badges on the front fenders and the rear lights have also been revised. Inside, the new E63 AMG will feature new instruments, higher-quality trims and the latest version of Mercedes’ Comand infotainment system.

With the launch of the new 2014 Mercedes-Benz E63 AMG, it will give buyers in the U.S. and around the globe, a more powerful version with better performance with the new 4MATIC system to keep all four wheels firmly planted on the pavement.