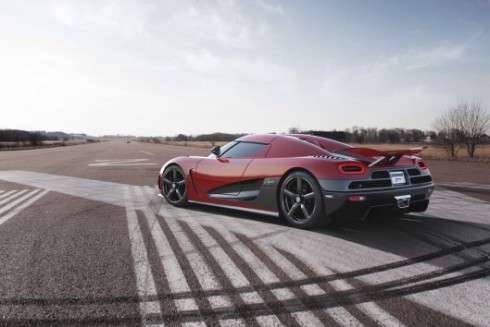 The Koenigsegg Agera R is filmed running an insane 250 mph at the Nürburgring Nordschleife at Gran Turismo’s Nurburgring supercar event, and it's not a video game.
Advertisement

There are only a few supercars on the planet like the Koenigsegg Agera R. With features like Aircore hollow carbon fiber wheels and a new dynamic rear wing, the Swedish hypercar is like no other. But what really puts the car into rarified air is the power output of 1,140 horsepower from the aluminum 5.0-liter V-8, which puts the Agera R into the top five most powerful cars in the world.

As reported by Gran Turismo Events, the 1,140-horsepower Koenigsegg Agera R topped out at 249.54 mph on the main straight of the Nürburgring Nordschleife at the Gran Turismo Nurburgring supercar event. 120 super cars attended the event, with some other popular cars like the Porsche GT3, Ferrari 458 and Lamborghini Gallardo.

But when the awesome 1,140 horsepower Koenigsegg Agera R was filmed passing the pit lane on Döttinger Höhe on Thursday, everyone including the owner was amazed by the mind-numbing speed of the car. The Agera R logged a "quite impressive" 249.54 mph on the 2 mile straightaway before braking before the bridge at Tiergarten. "No problems with stability under extreme speeds. The tarmac was a little bumpy while braking so It was quite exciting before the left turn" says owner Bård Eker from Norway.

The Agera R 5.0-liter V-8 is coupled to a seven-speed dual clutch, 1 input shaft transmission with paddle-shifters. The two-door Koenigsegg Agera R lightweight body is made from pre-impregnated carbon fibre/kevlar and lightweight sandwich reinforcements with carbon vents over wheels. Koenigsegg says the Agera R can be used as a daily commuter and comes with fitted luggage, special leather and colour requests, heated seats, ski box roof, skis, and a winter wheel package. Anyone want to take this beauty over Vail Pass in a snowstorm?

Take a look at the video that captured the supercar at the end of a 2.2-mile long straightaway, just before the cars brake for the bridge at Tiergarten.