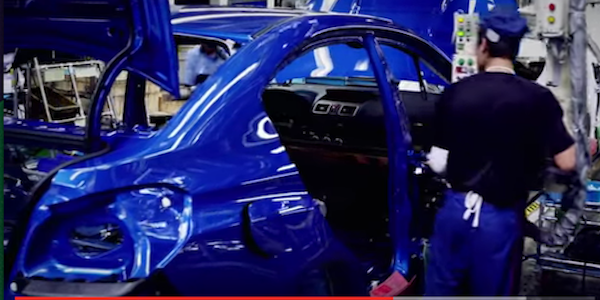 Two powerful earthquakes struck Kumamoto in south-western Japan. It is affecting automakers Toyota and Honda but not Subaru.
Advertisement

Fuji Heavy Industries (FHI) maker of the 2016 Subaru WRX STI performance cars extended condolences to those affected by the severe earthquakes that struck Japan’s island of Kyushu this week. The earthquakes have caused widespread damage to south-western Japan. While Toyota and Honda cited damage at their plants, Subaru was not affected.

Subaru’s main plant in Gunma, Japan where they make the 2016 WRX, WRX STI, Impreza, Crosstrek, Outback, Legacy, Levorg and Forester automobiles, was not affected by the powerful earthquakes. The plant is located farther north of the affected region.

The quakes killed at least 41 people and have caused severe damage to buildings and infrastructure in the region. Japan’s Nikkei newspaper reported Toyota would suspend operations at most assembly plants across Japan. The suspension across Toyota's facilities will be done in stages, and will last for about a week. Nikkei reported the staggered suspension across Toyota's plants is expected to lead to a drop in production, by about 50,000 vehicles.

FHI has two global plants where they manufacture all their automobiles. Subaru's other plant is located in the U.S., in Lafayette, Indiana, where they currently manufacture the Subaru Outback and Legacy sedan models. The new 2017 Subaru Impreza will begin production at the newly-remodeled plant later this year. The 2016 Subaru WRX and WRX STI are only produced in Japan.

Subaru’s main plant in Gunma will continue to produce the 2016 Subaru WRX and WRX STI without interruption from the Japan earthquakes. The new 2017 WRX STI will begin production soon. Subaru announced today, they will donate 5 million yen to the Japanese Red Cross to support relief efforts in the affected region.

LG's New EV Battery Plant Is a Welcome News for Tesla
Tesla Giga Berlin's New Hurdle: It's Not Only the Gov't, but Now Tesla Itself
END_OF_DOCUMENT_TOKEN_TO_BE_REPLACED