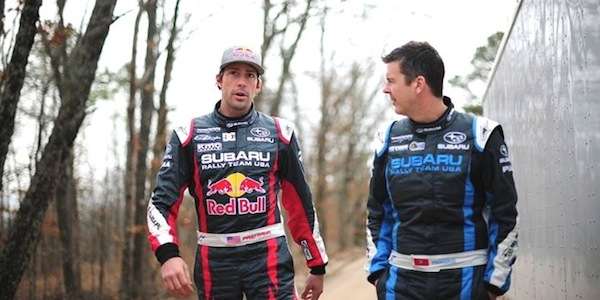 David Higgins and Travis Pastrana of Subaru Rally Team USA head to Portland for Oregon Trail Rally this weekend driving the new Subaru WRX STI. But how does the average new car buyer benefit from Subaru motorsports involvement? Subaru is heavily involved in motorsports first of all to win, but Subaru Technica International (STI), Subaru’s racing and high-performance partner, obtains valuable information from their race cars. How do they use the info?

Subaru, STI and Fuji Heavy Industries (FHI) collaborate to come up with the latest technologies that go into the cars you drive everyday. Subaru learns much from what happens on the race track, like the Rally circuit that David Higgins and Travis Pastrana will be involved in this weekend. They will be driving the newly-developed Subaru WRX STI.

The Subaru Rally Team USA will head to Portland for the third race this season at Oregon Trail Rally. They have a goal to win it all again this season, but there are no guarantees. Last month, David Higgins was knocked out of the race because of mechanical issues. Pastrana was able to finish second behind Ken Block. But win or lose, STI will take the information learned, and it will be applied to production cars like the new 2015 WRX and 2015 WRX STI. It will also be used in Subaru’s other multi-use vehicles like the Forester and XV Crosstrek for their Symmetrical all-wheel-drive systems.

Subaru relies heavily on developing better AWD technology to stay competitive in the Rally America Championship and also the 2014 Global RallyCross races. And competition breeds success for all the automakers. Subaru has won the the Rally America Championship for the last three years, and the Ford team is also improving in order to overtake Subaru.

There’s a good reason Subaru is seeing record sales month after month and year after year. They use their motorsports involvement to come up with new technologies that a new active generation of buyers is looking for. This technology is first developed on the race course and rally circuits that will take place this season, and then transferred to the cars you will drive tomorrow.

With the 2014 Global Rallycross season still two months away, the Subaru team is in Atlanta testing the new 2015 Subaru WRX STI race cars for Sverre Isachsen and Bucky Lasek. After three full days, the team and drivers are happy with progress and hopes are high for the upcoming season. This weekend, David Higgins and Travis Pastrana will take their new Subaru WRX STI Rally cars to Portland for Oregon Trail Rally. You will benefit directly from their involvement. Stay tuned to Torque News for the latest 2015 Subaru WRX STI Rally car news.

Watch the story of Pastrana’s return to Subaru in the latest episode of Launch Control.