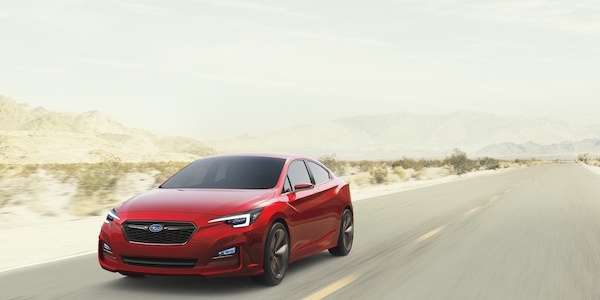 Waiting for the 2017 Subaru Impreza will likely save compact car buyers money. What’s coming on the new Impreza?
Advertisement

We don’t know if it will be the same fuel-saving 1.6-liter engine that’s in the new Levorg Sports Tourer sold in the UK, but it will be an engine that’s more fuel-efficient than the current 2.0-liter naturally aspirated engine. There will be new technology under the hood of the 2017 Subaru Impreza that will be produced right here in the U.S starting next year.

The future is here now in the Levorg sports tourer

The Levorg’s engine would be a good choice for the new Impreza because it comes with Subaru’s latest engine technology. It gets the smaller newly-developed 1.6-liter DIT (Direct Injection Turbo) Boxer gasoline engine. And get this, it’s 36 percent smaller than Subaru’s Legacy 2.5-liter naturally aspirated four-cylinder engine, yet produces similar performance.

Small car shoppers will benefit by waiting for the 2017 Impreza because it will be more fuel-efficient and stingy at the gas pump translating to more dollars saved. It’s going to be true of all Subaru vehicles in their lineup in the near future. Subaru will overhaul its entire powertrain technology beginning with the new Impreza compact, adding cylinder deactivation and lean combustion cycles no later than 2020, in order to meet more stringent emissions standards. Subaru boss Yasuyuki Yoshinaga said they will produce engines “with thermal efficiency rates above 40 percent, which would top that of the engine in the Toyota Prius hybrid.”

The new 2017 Subaru Impreza will get new engine technology and it could get the Levorg’s fuel-stingy 1.6-liter Direct Injection Turbo Boxer gasoline engine or some variation of it. Subaru says the UK’s Levorg 1.6 GT gets nearly 40 mpg on a combined European cycle with emissions of 164 g/km. It uses a high-compression performance design but it still runs on regular unleaded fuel.

Fuji Heavy engineers succeeded by designing a new downsized turbo engine that uses regular fuel, and offers superior fuel efficiency and the same power output of the Legacy sedan’s larger 2.5-liter powerplant. It could be coming in the new-generation Impreza. It’s good news for compact car shoppers who will also be looking at the Honda Civic, Toyota Corolla, Ford Focus and Hyundai Elantra along with the 2017 Subaru Impreza. The car will be produced in the U.S. starting late 2016. Stay tuned.

Elon's Memo Shows Tesla May Have a Shot at Record Q3 Deliveries
Elon Musk Says LFP Battery Cost Is "Closer To Nickel," But Has Other Advantages
END_OF_DOCUMENT_TOKEN_TO_BE_REPLACED