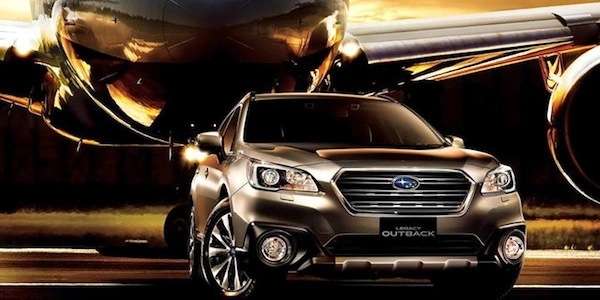 How 2015 Subaru Outback gets its DNA from aerospace industry

The new generation 2015 Subaru Outback’s DNA can be traced all the way back to FHI’s involvement in the aircraft industry from 1917. Subaru, the automotive branch of Fuji Heavy Industries (FHI), was formed in 1953 by the merger of five companies that were previously part of Japan's first private aircraft manufacturer, Nakajima Aircraft Ltd. Today, FHI is still involved in the aerospace industry.

Subaru benefits from FHI’s other divisions

The best example of how FHI uses what they learn from their aerospace division, is their revolutionary horizontally opposed boxer engine which applies this technology to their Subaru vehicles. FHI has committed to maximizing the advantages of its Boxer engines and has continued to enhance them to power its vehicles since 1966.

Today, Porsche is the only other volume automaker employing boxer engine technology. Subaru produces more boxer engines in more configurations than anyone else, with 2.0- and 2.5-liter four-cylinder, 3.6-liter six-cylinder, naturally aspirated and turbocharged, and gasoline and diesel versions all currently in production. The Boxer engine has reached a milestone and has hit the 15 million mark in production.

Today, FHI is participating in the development and production of the Boeing 777X next-generation large passenger jet. FHI is working with Boeing Aircraft and will be in charge of building the center wing section, integration of the center wing section with the main landing gear wheel wells, main landing gear doors and wing-to-body fairings (forward). Subaru’s parent company will gain new information that can be shared with their automotive division and their performance and motorsports division.

What makes FHI so successful, is the fact that they share technological advancements with their automobile division Subaru, which helps the Japanese automaker have a great deal of technological and financial resources to draw from. Many of the advancements that went into the new 2015 Subaru Outback came from what FHI’s learned from the aerospace industry.