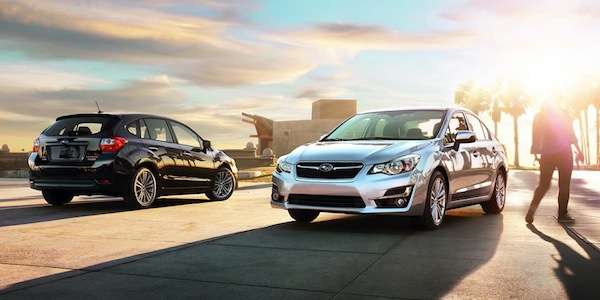 The 2015 Subaru Impreza sometimes gets lost in the Subaru lineup after siblings Forester and Outback get all the press. How did Impreza make 3 Top-Ten lists?
Advertisement

Edmunds just came out with their 11 Best Used Cars for College Students list and the 2012-2015 Subaru Impreza makes the list. Edmunds says all the cars have key attributes that include modern electronics, distinctive styling, versatile cargo area, good crash ratings and low cost of ownership.

Impreza singled out for its all-wheel-drive

It should be no surprise what sets the Subaru Impreza apart from some of the others that made Edmund’s list like the Scion tC, Ford Mustang, Kia Soul and Honda Fit is it’s all-weather capability. Edmunds says, The Subaru Impreza (2012-'15) can be purchased from $12,900-$26,000: “For those facing snow at college, the all-wheel-drive Impreza is a great choice.”

Impreza compact sedan and hatchback models also made Kelly Blue Book’s (KBB) 10 Best Back-to-School Cars 2015 list. The list included cars that are all available for around $20,000 or less. The 2015 Subaru Impreza starts at $18,067 and was also singled out by KBB for its all-weather capabilities. KBB says, “For students studying in a region where winter means snow, having a car with standard all-wheel drive is a huge plus. An even huger plus: both the 4-door sedan and 5-door hatchback start at less than $20,000.”

Even more impressive, Impreza recently made Autobytel’s 10 Most Reliable Used Sedans for 2015 list. The Subaru Impreza made the list as the number two most reliable sedan along with an impressive list from Honda, Toyota and Lexus sedans. Autobytel listed the sedans from first to last. Toyota Avalon, Subaru Impreza, Honda Accord, Toyota Camry, Lexus ES, Hyundai Elantra, Acura RL, Infiniti G37, Toyota Corolla and Hyundai Sonata.

What Autobytel says about Impreza

“The Subaru Impreza almost feels like a uniform in the Northeastern United States, and buyers aren't flocking to this entry-level compact simply because it offers standard all-wheel drive. No, the Subaru Impreza has also earned a reputation as one of the most reliable used sedans in its segment, and its appeal is further broadened by the improvement in fuel mileage that comes with 2012-and-up models. The Impreza's 2.0-liter, 148 horsepower engine is good for 27-mpg in stop and go driving and 36-mpg on the highway when paired with its continuously-variable automatic transmission. If you're looking for a bit more performance, you can also snag an Impreza that features a traditional five-speed manual gearbox.”

The 2015 Subaru Impreza makes three top-ten lists and not only comes with standard all-wheel-drive, but its getting recognized for its other key attributes like affordability, reliability, fuel efficiency and sporty character. For more info on the compact, check out the 2015 Impreza review here.