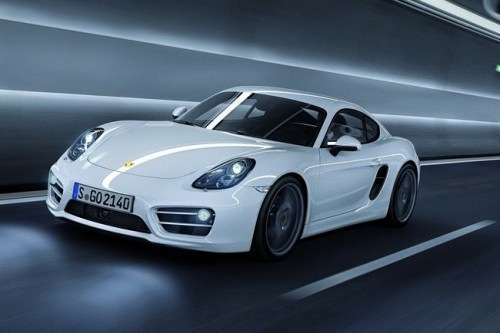 Harry Styles buys Porsche Carrera for his father, then one Cayman S for self

Harry Styles of One Direction fame bought a new Porsche Carrera for his father, and then decided to purchased a new 2014 Porsche Cayman S as a birthday gift to himself.
Advertisement

When you are Harry Styles of One Direction, you can purchase your own birthday gift and get just about anything you want. The teenage star went out and bought a new red 2014 Porsche Cayman S for his own birthday gift to add to his stable of cars. Harry has good taste in automobiles and already owns an Audi R8 and a Range Rover Sport. Harry passed his driving test in December 2011 and now on February 1, he turned 19 and is celebrating with a newly purchased Porsche sports car.

According to a report by Entertainment.ie, Harry purchased the new Porsche after he test drove a Porsche Carrera that was to be a gift for his dad. But being a normal 19 year old kid, the One Direction star couldn’t resist getting a new Porsche sports car for himself too. A source told the Daily Star newspaper: ''Harry is besotted by cars and loves the Porsche brand after test driving a few. He has bought a £100,000 Carrera from a car dealer near his dad's home in Sale, Manchester.”

Harry chose well and wanted the Cayman S which is the more powerful version. Harry’s new 2014 Cayman S will be a fun ride with its 3.4-liter, flat-six engine with DFI and VarioCam Plus that delivers 325 horsepower. It accelerates from 0-60 in 4.7 seconds with a top speed of 175 mph. With the optional PDK and Sport Chrono package, it can reach 60 mph in a very quick 4.4 seconds. The new Cayman S will certainly leave Harry anticipating the next curve. We just hope he will be able to keep his license after getting it back from being totally customized.

Harry is having the new Porsche customized

It’s reported by Daily Star that Harry is having a few goodies added to the factory red 2014 Cayman S. He is having it customized with extras including a six speaker Bose surround sound, heated seats and is also installing a telephone. The factory Cayman S doesn’t need much customizing and Harry will definitely have a unique car to drive around North London.

What makes the new 2014 Porsche Cayman so unique, is the mid-mounted flat six engine sits no more than 12 inches behind the driver. This translates to the new sports car having a large proportion of the vehicle’s weight near the center of the vehicle. The center of gravity is central and low and the weight is equally distributed over the front and rear axles. The new Cayman is as balanced as any sports car on the road thus delivering exceptional handling, and Harry will have fun driving it, particularly in the corners.

When you are Harry, you can also buy your dad a new Porsche too. Harry bought a Porsche Carrera as a gift for his ''brilliant'' father Des. The new Carrera he bought for his dad is black with tinted black windows. Although his father would never expect his famous son to buy him a car, he was appreciative of the new Porsche gift. The 'Little Things' singer's beloved dad has said he would love Harry to buy him a car, though he insisted he would never rely on his superstar son for financial benefits.

It seems Harry’s dad is also wanting a Mercedes-Benz to go along with his new Porsche Carrera. Des said: ''I wouldn't take money from Harry. But I'm sure one day I'll come home and there's a Mercedes on the drive or something, quite possibly and that would be lovely. Maybe Harry’s dad was giving Harry a hint at what he wants for his next birthday.

Look for Harry Styles to be tooling around in his new shiny red 2014 Porsche Cayman S in North London as soon as he gets it back from being customized. Just listen for the new Cayman S with the extra loud music coming from the new six-speaker surround sound system.