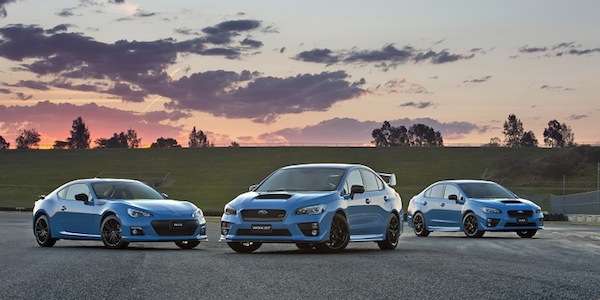 Subaru announces full specs for the WRX Premium special edition models with the CVT automatic that will be limited to 200 and WRX STI Premium with the 6-speed gearbox limited to just 50 examples. Australia also gets 50 examples of the Hyper Blue 2016 BRZ sports coupe.

Both special edition models will not get any engine upgrades. In Australia, standard form WRX uses a 2.0-liter turbo boxer producing 197kW/350Nm, while the WRX STI comes with a 2.5-liter turbo developing 221kW/407Nm. Nick Senior, Managing Director, Subaru Australia thinks the Hyper Blue 2016 Subaru WRX STI and WRX will be a hit with performance fans. "These specials will certainly earn the respect of our Subaru blue army of performance car fans.”

Tesla Giga Berlin's New Hurdle: It's Not Only the Gov't, but Now Tesla Itself
Teslas Are Sold Out Until 2023, But The Timing May Reverse
END_OF_DOCUMENT_TOKEN_TO_BE_REPLACED