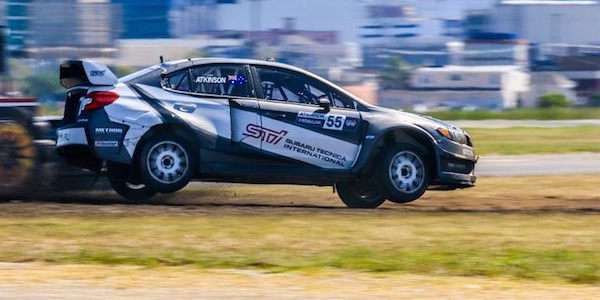 All eyes were on Chris Atkinson in the new 2017 Subaru WRX STI at Atlantic City GRC. How did the new STI perform?
Advertisement

In the Semi-Final Heat, Atkinson’s STI started in the second row and looked good, although slower than the leaders, and he finished with a third place and advanced directly to the Final. Sverre Isachsen and Bucky Lasek both had to run in the Last Chance Qualifier (LCQ) and advanced to the Final after finishing 2nd and 3rd respectively.

The Final at GRC Atlantic City

The Final was shaping up to be a good test as Atkinson had the #55 2017 WRX STI in the second row to start the race. Lasek was in the third row and Isachsen's #11 WRX STI rolled up in the fourth row just in time for the start after getting emergency repairs made to the turbo.

The Final features 12 GRC Cars and the whole field got off to a clean start. The race was going well for SRTUSA’s three GRC cars. Chris Atkinson’s 2017 WRX STI looked good and was trying to keep pace with VW, but tire problems forced Atkinson out of the race. The Australian ran several laps with damaged tires, and the team decided to pull off in order to save the new STI from unnecessary damage. Isachsen finished the Final in 9th place and Lasek who also had a blown tire, finished in 10th.

The Subaru team, and new driver Chris Atkinson, made a respectable showing at Atlantic City, but still has a way to go to catch the faster VW and Ford cars. Scott Speed took first place, Patrik Sandell second and Brian Deegan rounded out the podium. Next up on the Red Bull Global Rallycross Series is Round 10 in Seattle, Washington September 16-17. We’ll see if Subaru brings the 2017 Subaru WRX STI back for another test. Stay tuned.