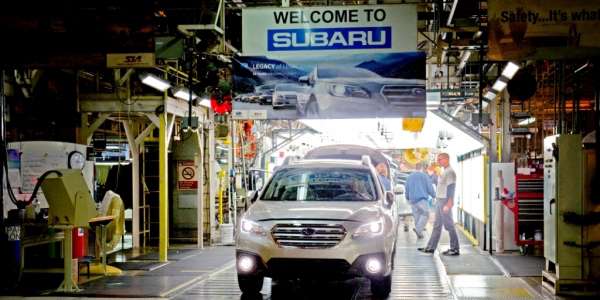 The 2017 Subaru Outback gets the attention, but it’s the 2017 Impreza that will kick off new things for Subaru. What will it mean for consumers?
Advertisement

Subaru of Indiana Automotive, Inc. (SIA) just produced its 3 millionth car at the Lafayette, Indiana plant. It’s quite an achievement when you think about how far the small Japanese automaker has come. Remember the Subaru Baja and discontinued Tribeca? They were both built at the plant and contributed to the total number of cars that have rolled off the U.S. assembly line.

A Lapis Blue Pearl 2017 Subaru Outback gets the attention and it’s the 3 millionth car produced in Lafayette, but don’t forget about the Legacy sedan. It has been produced at the plant since it opened in September 1989. Also contributing to the number is Toyota’s Camry. Subaru contracted to build the sedan for Toyota who owns a 16.5 percent stake in Fuji Heavy Industries, the patent company of Subaru. The Subaru story is about to get a lot more exciting, and it will benefit consumers around the globe. Enter the 2017 Impreza.

The 2017 Impreza will be the next Subaru all-wheel-drive vehicle that rolls off the line in Indiana. Subaru is moving production from Japan to the US. Subaru is taking a page from Volkswagen, who unified their platforms with the Golf. Subaru has developed a new Global Platform that will underpin all models going forward.

What does it mean for car buyers?

The first representation of this all-new platform arrives in late 2016 in the form of the all-new 2017 Impreza. The Impreza sedan and hatchback will be roomer, and the seating position and steering wheel adjustments will allow room for taller drivers to be more comfortable. The car will feel bigger, have a more premium attitude, and will attract a larger audience.

Just like Volkswagen did with the Golf platform, Subaru is doing with the 2017 Impreza. The Golf is a wildly popular compact car around the globe because there is more room inside than its outside appearance suggests. The same will be true of the new-generation Impreza. There will be more legroom and the steering wheel will have more travel than the previous generation model. The all-new 2017 Impreza will be far more comfortable to live with than the current Impreza. Taller people will fit better, and those with shorter arms will be able to find the perfect driving position.

The new 2017 Impreza represents a new global era for the Japanese automaker. It’s the most important new model since Subaru introduced the Crosstrek crossover. Impreza will also usher in Subaru’s all-new 3-Row, 7-seat Crossover in 2018. What could be called, the Ascent 7, will also be built on this new Global Platform at the plant in Indiana. The 2017 Subaru Outback gets the attention at Subaru’s plant in Indiana, but it’s the 2017 Subaru Impreza that will kick off new beginnings for Subaru. Consumers will benefit from the changes soon.