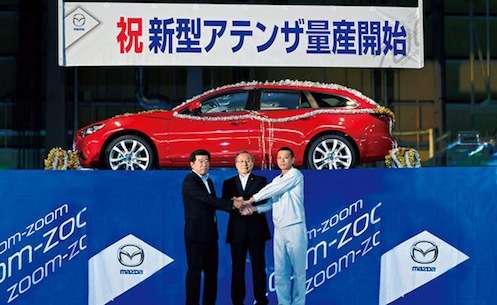 The first 2014 Mazda6 rolled off the assembly line in Japan and it wasn’t the new sedan that everyone has been waiting for.
Advertisement

Production of the all-new Mazda Mazda6 began yesterday and the first vehicle to roll off the assembly line was a Mazda6 wagon. The highly anticipated Mazda6 sedan was not the star of the opening production ceremonies. The new Mazda6 has been fully redesigned for the first time in five years and Mazda threw a party at their Hofu Plant No. 2, in Yamaguchi, Japan.

This wasn’t a small ribbon cutting ceremony, but 500 people gathered to see Mazda's Representative Director and Chairman of the Board, President and CEO, Takashi Yamanouchi, and a representative of the Mazda Workers Union start the commemoration ceremony. The three joined hands before giving speeches before the gathering of company executives and employees.

The biggest surprise of the day was that the first vehicle to roll off the line was not the highly anticipated sedan that Mazda has been giving us teaser video's of. But Mazda chose to reveal a Soul Red Mazda6 wagon in the opening ceremonies. Mazda says the all-new Mazda6 wagon is built to European specifications and powered by the SkyActiv-G 2.0 gasoline engine.

The Mazda6 is the flagship model

Mazda is counting on the all-new Mazda6 to propel the company to new sales heights. The new Mazda6 (known as the Atenza in Japan), is the flagship model of a whole new generation of vehicles that Mazda will be bringing to production in the future. Mazda is hoping the new Mazda6 will continue the successful improvement of their brand image around the world.

In his speech yesterday, Takashi Yamanouchi said "I am deeply moved that production of the third generation Mazda6, the flagship model of our new-generation vehicles, starts in such an important year for us. The new Mazda6 that starts rolling off the line today features both SKYACTIV TECHNOLOGY and KODO - Soul of Motion design. Its development represents the very best of our engineering capability and our uncompromising attention to detail. Let's all work together to promote the new Mazda6, to make it a model that gains the support of customers all over the world and leads the Mazda brand to new level."

The redesigned Mazda6 will be the first Mazda vehicle equipped with a new brake energy regeneration system called i-ELOOP. Mazda says the new brake system will respond more precisely to the driver's intentions, “while offering the class, style, quality and comfort people expect from a car in the CD segment.”

Look for the new 2014 Mazda6 to be introduced in Europe and Japan first before the end of 2012. The U.S. will see the all-new Mazda6 in early 2013, but it's unlikely the new Mazda6 wagon will be offered in North America. Later this month, Mazda will premiere the new Mazda6 sedan with Russian specifications at the Moscow International Automobile Salon 2012.