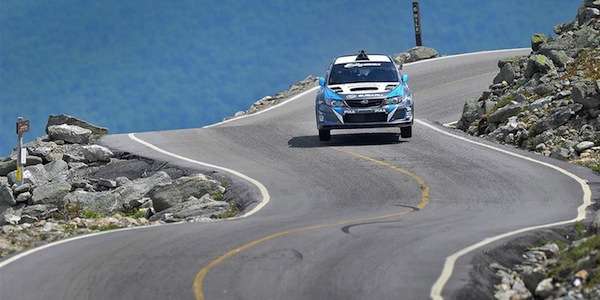 Faster Subaru WRX STIs Return to the Most Terrifying Hillclimb in America; It’s Coming in July

Subaru will bring faster 2017 WRX STI Rally cars to the most terrifying hillclimb for rally drivers in America. It’s coming in July.
Advertisement

The Mt. Washington Hillclimb has to be one of the scariest rides in the new American Rally Association Championship series. Steep drop offs would send a car tumbling thousands of feet down the mountain if they make one mistake. David Higgins and teammate Travis Pastrana will return to the Subaru Mt. Washington Hillclimb July 6-9, 2017 after a three-year hiatus in two new 2017 Subaru WRX STI Rally cars.

The last time they were there, David Higgins and co-driver Craig Drew smashed the course record at Mt. Washington in a 2014 Subaru WRX STI. Higgins broke his previous 2011 record with a time of 6:09.09 on the 7.4 mile course. In July, he will attempt to break it again in the newly-prepared 2017 Subaru WRX STI. Travis Pastrana, who set an unofficial record on Mt. Washington in 2010, will also be pushing his new #199 STI to the limit.

The oldest motorsports event in America

Billed as the “Climb to the Clouds”, it’s the oldest motorsports event in the U.S., and possibly the most terrifying for rally drivers. The first race was run in 1904, seven years before the first 500-mile race at the Brickyard in Indianapolis, and 12 years before the inaugural Pikes Peak Hillclimb in Colorado.

Pastrana was just seconds behind Higgins three years ago on the mountain when his teammate broke the record. Pastrana knows how big a challenge the climb to the top of the 7.4 mile course will be. He says, “Mt. Washington Hillclimb is probably the most intense road I've ever driven. Higgins beat me by just a few seconds last time, so I'm looking forward to a rematch. This year we are returning with faster cars and more knowledge of the road. It's going to be an epic run!”

David Higgins and Travis Pastrana will be attempting to set a new Mt. Washington Hillclimb course record again, this time in 2017 Subaru WRX STI rally cars that are much faster than the 2014 versions. It’s arguably the most challenging and possibly the most terrifying motorsport event for rally drivers in America. It's coming July 6-9.

Watch Pastrana and Higgins Climb to the Clouds on Mt. Washington video