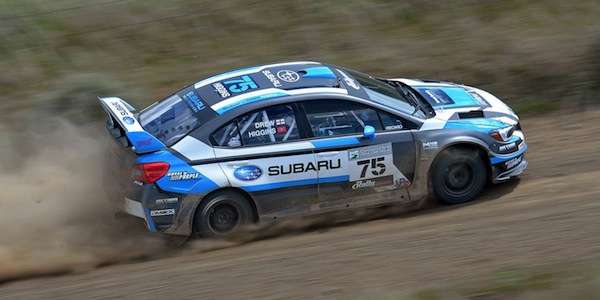 David Higgins and co-driver Craig Drew win the Oregon Trail Rally. What challenges almost kept them off the podium?
Advertisement

Oregon Trail Rally is a three day event and anything can happen during the 18 stages with a wide variety of terrain surrounding the Portland area. SRT USA was ready with the 2015 Subaru WRX STI rally car fresh off a victory last month. David Higgins and co-driver Craig Drew win the event but not without having some challenges that could have kept them off the podium.

Day one started with heavy rain that fell in the area to get the race off to a slippery start. Higgins and Drew managed the conditions skillfully, piloting the WRX STI #75 to a 19 second lead over their closest rival FY Racing’s Adam Yeoman after day one. Their 2015 STI performed flawlessly and set the team in a great spot for day 2 on the forest rally stages.

Conditions were dry on Saturday, day two at the Oregon Trail Rally, which made for a fast second day. The teams moved to the wide-open high desert roads near Dufur, Ore and speeds were high. SRT USA began losing ground when the STI began having engine trouble that slowed their pace considerably. The competition reported top speeds over 120 mph on the dry gravel roads but Higgins was down on power and struggled to keep up. “We’re having to drive harder to carry more corner speed and maintain momentum,” said Higgins.

FY Racing’s Adam Yeoman and Jordan Schulze won the first two stages of day two in their 2007 Subaru WRX STI and hoped to keep the pressure on, but the Subaru Rally Team USA duo played it smart, managing their engine trouble and held off the challenge and won the final six stages to end Day 2 with a 58.7 second lead.

Overnight, Subaru Rally Team USA technicians performed an engine swap that they hoped would return the Subaru to full power for the final day’s stages. Higgins and Drew were back to full power and drove the 2015 STI to victory by winning all six stages on Sunday.

Higgins and Drew tried out some new equipment on the 2015 Subaru WRX STI at Rally America Championship round, the Oregon Trail Rally this weekend. The new Alcon brakes helped stopping power, but it also helped reduce weight on the rally car by...read more.

“It’s been a tough event,” said Higgins at the finish. “The stages are demanding and it’s a challenge right through to the end. Today’s stages are some of the most technical stages in the States, and it was super tough, to be honest. You’ve got to keep concentrating, because you can’t afford to back off anywhere. The key for me is you’ve got to learn to drive around problems. Winning rallies and winning championships is all about making the best out of the bad situations.”

FY Racing’s Adam Yeoman and Jordan Schulze finished in second place, 2:59.1 minutes behind Higgins and rounding out the podium were George Plsek and co-driver John Hall, who brought their 2006 Mitsubishi Lancer EVO to a third place finish. “I have to break up the Subaru parade a little bit,” said Plsek. “There have been all these Subarus on the podium and it’s good to get another manufacturer up here.”

With the win this weekend at the Oregon Trail Rally, SRT USA’s David Higgins and Craig Drew made it three in a row driving the new 2015 Subaru WRX STI and have a commanding lead in the Rally America national championship. Next up is the Olympus Rally May 16-17, Olympia, Washington.