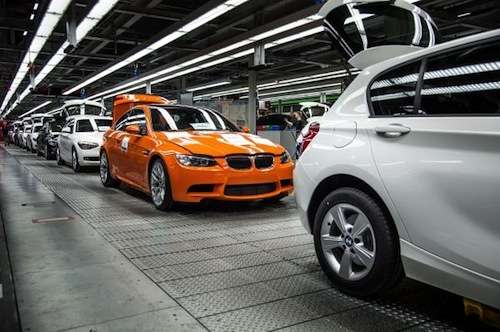 BMW announces the end of production for the fourth generation of the BMW M3 Coupe as the last 2013 high-performance model rolls of the line. But it signals exciting things ahead for the 2014 M3/M4.
Advertisement

The last of a powerful breed of sports cars has come to an end. The fourth-generation BMW M3 powered by a high-revving V8 engine is ending production as the last 2013 BMW M GmbH M3 rolled off the production line in Germany. This is the end of an exciting era, and the BMW M3 Convertible, likewise will end its run but will continue in production until September 2013. What does this mean for the future of the BMW M3?

The end of an exciting run for the 420 hp BMW M3 launched in 2007 could be met with tears and gnashing of teeth. The fourth-generation model was light weight, fast and had a driving dynamic like few other cars on the planet. It featured an aluminum hood, plastic front body panels and a carbon fiber roof. So why is BMW ending such a successful run for the M3?

Why is BMW ending production?

An end of an era means only one thing for BMW M GmbH. We are going to see the fifth-generation 2014 BMW M3 which will be even better than the outgoing model. The next gen M3 will likely be an M4 model. It’s been reported that BMW is strongly considering a new M4 series for both the coupe and convertible versions of the M3. A newer updated model will have to be produced because of competition from Audi and Mercedes.

The new BMW M4 will be need to be even faster and lighter than the outgoing model to keep up with the evolving performance landscape. The performance car market is changing rapidly and BMW knows it has to keep up with its fellow German automakers to stay competitive. BMW remains number one in the performance luxury segment, but Audi and Mercedes are closing in quickly.

The new M3 (M4) will need to be lighter, faster, and more efficient than any of the competitors. And there is plenty of competition coming from the Audi RS5, Mercedes-Benz C63 AMG coupe, Lexus IS F and Cadillac ATS-V. There have already been spy shots of the next-generation M3/M4 and testing has been underway for a number of month’s.

It’s been seen with a wider front and rear track, performance wheels and tires, and there will likely be even more carbon-fiber components on the body and chassis to reduce weight further. The fenders are wider and it still will feature the M hallmark quad exhaust tips.

The the new M3/M4 may not have V8 power, but could see a new 3.0-liter twin-turbocharged inline six with 450 horsepower. This will make the new BMW M3/M4 even more powerful and fuel-efficient than before. Many performance automakers will have to abandon V8 power in order to comply with the new emissions and fuel economy requirements. It will likely still feature a a six-speed manual or a seven-speed wet dual-clutch transmission.

When one era ends it opens the door for an even more exciting new opportunity for the future. Look for the new 2014 BMW M3/4 to be lighter, faster and more agile than before. While it’s sad to see the last fourth-generation 2013 BMW M3 roll of the assembly line, we look forward to the future high-performance M3/M4 model from BMW.

LG's New EV Battery Plant Is a Welcome News for Tesla
Tesla Giga Berlin's New Hurdle: It's Not Only the Gov't, but Now Tesla Itself
END_OF_DOCUMENT_TOKEN_TO_BE_REPLACED