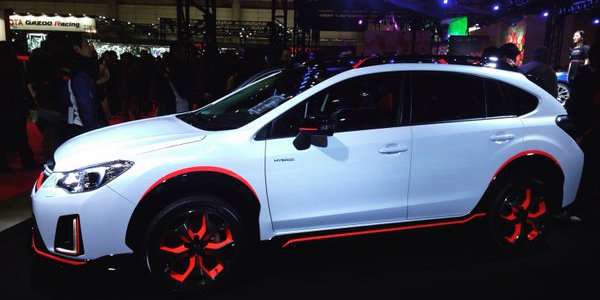 The Subaru Crosstrek Hybrid STI makes its debut at the Tokyo Auto Salon. If this car reaches production, it will make performance enthusiasts drool.
Advertisement

Subaru Crosstrek fans would like to see an STI model, yet it won't be coming in 2016. Check out the new Subaru XV Hybrid STI Concept at theTokyo Auto Salon. If Subaru builds it, the crossover will make performance enthusiasts drool on the hood. Subaru fans would like to see a Crosstrek with a 2.0-liter turbo engine, but what about a Crosstrek Hybrid STI? It makes perfect sense, but we likely won't see it anytime soon.

It’s what STI does underneath

STI also includes a number of their performance parts that Subaru says will improve the driving performance that should excite performance fans around the globe. They don’t give details of the drivetrain which is typical of the brand. We already know the current 2016 Crosstrek Hybrid U.S. model gets improved performance from the 2.0-liter Subaru Boxer engine coupled with the hybrid drivetrain.

Improved performance from the hybrid

The Crosstrek’s hybrid engine uses a slightly higher compression ratio (10.8:1) than in the standard gas model (10.5:1), along with reduced-friction piston rings and valve springs and a higher capacity exhaust gas regeneration (EGR) system with an EGR cooler. It also gets an eco-performance boost from the hybrid’s permanent-magnet AC synchronous electric drive motor, which produces 13.4 hp from 1,500 rpm-6,000 rpm. The hybrid gets a 12 hp power bump for a total hybrid system output of 160 hp.

The Crosstrek’s hybrid’s electric motor also contributes 47.9 lb.-ft. of torque from 0-1,500 rpm which gives the hybrid extra power from a standing start. This gives the crossover a total system torque of 163 lb.-ft. at just 2,000 rpm. Crosstreks equipped with the CVT includes a manual mode with steering wheel paddle shifters. A manual gearbox is also available for driving enthusiasts.

Subaru has already announced they will be producing more models tuned by STI in the U.S. These STI-enhanced Subaru’s will feature more extensive modifications from the factory than previously offered, such as suspension, performance, braking, chassis and aerodynamic upgrades. If STI added a bit more performance to the naturally aspirated 2.0-liter boxer coupled with the hybrid motor, with suspension, aerodynamic body and brake upgrades, the new Crosstrek STI would be a sporty model in the lineup Crosstrek fans would buy in a heartbeat. Will Subaru take it from concept to production? Not in 2016. Stay tuned.