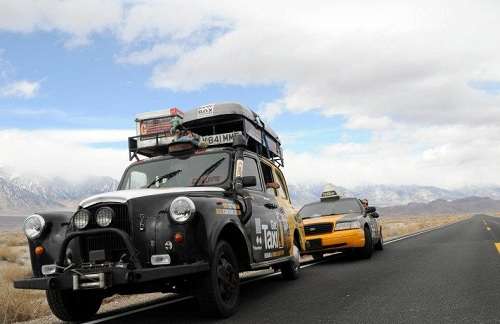 What do three college kids with too much time on their hands do? They go drink some pints at a British pub and come up with a brilliant plan to break the world’s record for the most expensive taxi ride.
Advertisement

Only a group of college guys getting together in a bar with too much time on their hands could come up with an idea like this. A few years ago after having a few pints in a British pub, a crazy idea was hatched to find out just how high a taxi meter would go. The idea became reality when the group of three college buddies from Gloucester, U.K. purchased a 19-year-old cab on eBay for $2,000.

The adventure, as told by The Wall Street Journal, is a story that is better than any fiction book. After the three from Great Britain, Paul Archer, 25, Leigh Purnell, 24, and Johno Ellison, 28, purchased the 1992 London Black Cab, they set out on an around-the-globe journey that started in London.

Over the past 13 month’s the treck to find out how high a cab fare can climb, has taken them more than 32,000 miles around the world. According to the Guinness World Records, the previous record for the most expensive cab ride was $64,645 set by Jeremy Levine, Mark Aylett, and Carlos Arrese back in 1964 when they took a 21,691-mile four-month cab ride from London to Cape Town, South African and back.

Since leaving London in February of 2011, their journey has taken them to the Middle East where they had a run-in with the Taliban, to the Arctic Circle in Finland, and up to 17,000 feet at the Mount Everest base camp. After leaving all their maps at home, they’ve had to rely on a GPS unit along with laptops and mobile devices.

So what happens when you run out of land? The trio loaded the 1992 LTI 2.7 liter diesel FX4TK London cab onto a cargo ship in Australia and headed to Oakland, California at a cost of $6000. As the three friends have driven their cab, dubbed "Hannah," around the world, they've been having a lot of fun, but according to the report, they've also had to work raising money for the British Red Cross, in the form of corporate sponsorships.

Since reaching port in Oakland,the three amigos have been in the U.S. on a 12-state tour and ended up in New York where they’ve recently been spotted. Around 2 p.m. Monday, the taxi meter hit $109,954. It seems they are quite amused at how Americans are whining about the cost of gasoline. "Americans don't know how good they have it," he told the reporter, after recounting how he paid $12/gallon for fuel in Turkey.

You can keep track of the trio’s progress via their blog, ItsOnTheMeter.com. Image source their Facebook Page.