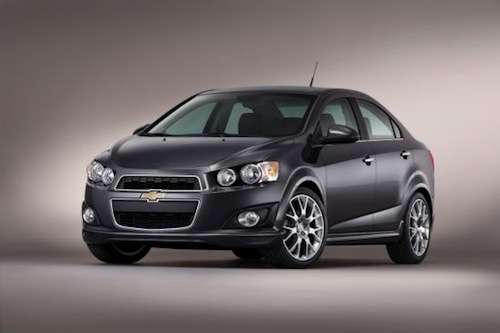 Chevrolet has announced production of the new refined Sonic Dusk sedan that will make its debut at the 2012 SEMA Show.
Advertisement

The Sonic Dusk made its debut at last years SEMA Show as a concept car and received such a good response, that GM is bringing the Dusk sedan to production soon. The Dusk will move from concept to production and the new model from Chevrolet will be unveiled next week at this years SEMA show. Chevrolet offered the sporty Sonic RS to buyers, and the Dusk sedan will offer a new degree of sophistication and refinement to the lineup. GM has done it with the Camaro and Corvette line, and now expand their offerings to the subcompact segment.

The Sonic Dusk that will be shown starting next week at SEMA will feature a number of new exterior treatments. The new Dusk subcompact sedan features “a production-intent package with ground effects.” The exterior treatments will include a new rear deck spoiler, 18-inch aluminum wheels with a Pearl Nickel finish, and the SEMA car will get a sophisticated looking Ashen Grey exterior color.

Other exterior features will include a matte finish on the upper and lower grilles, door handle inserts and rear license plate trim. On the body moldings, the new Dusk sedan will get stainless steel lower window moldings that will add an additional “upscale accent” to the body. Chevrolet listened last year and heard from customers that exterior styling was a big factor in their purchasing decisions. We see that in the huge aftermarket business as buyers want to “customize” their cars and trucks.

Chris Perry, vice president of Chevrolet marketing, says the new Sonic Dusk is being brought to production as a result of the positive reaction from attendees at last years SEMA Show. “Just like we’ve done with Corvettes and Camaros, we’re taking another one of our core products and adapting it to our customers’ lifestyles. The reaction to the Sonic Dusk concept last year was overwhelmingly positive and proved customers are interested in a more-refined subcompact. We’re moving quickly to bring Sonic Dusk to Chevrolet showrooms.”

And it doesn’t stop with the new exterior styling of the Dusk. The interior also gets some special treatments like Jet Black leather-trimmed seats with suede accents and Mojave tan inserts. It also gets Mojave accent stitching and tan-color door panel and instrument panel accents that complete the Dusks unique cabin effects. It also gets the latest technology and comes equipped with Chevrolet’s MyLink infotainment system with smartphone, Bluetooth, plug-in outlet or USB.

The new Sonic Dusk will be powered by the sporty Ecotec 1.4-liter turbocharged engine that produces 138 hp and 148 lb ft of torque. The turbo provides plenty of power for the small subcompact and will deliver sporty performance. The production models will feature the turbocharged engine mated to either a six-speed manual or six-speed automatic transmission.

Chevrolet has not announced when the new production Sonic Dusk will hit showrooms, but look for the performance-oriented Sonic RS to arrive later this year.