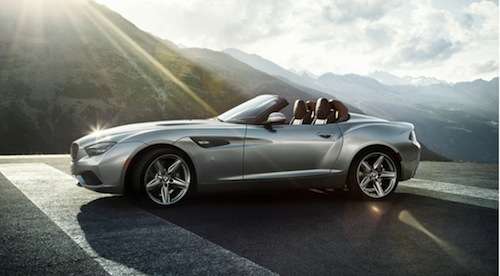 The collaboration between BMW and Zagato has produced the BMW Zagato Roadster which has finally been unveiled at Pebble Beach.
Advertisement

BMW released the first teaser image of the new Roadster which we showed you here, and now the one-of-a-kind automobile is revealed at the Pebble Beach Concours d’Elegance. After the positive reaction to the Coupe, the German and Italian companies agreed to take their partnership one step further and build a Roadster model. The two companies wanted to have the car ready for the California event and built the Roadster in an incredible six-weeks from design to the finished model unveiled today.

“It was only with the expertise of both companies in the manufacture of high-end one-off cars and another display of outstanding teamwork that we were able to finish the car on schedule,” says, Adrian van Hooydonk, Senior Vice President BMW Group Design.

The Roadster is more than just a version of the coupe with the top chopped off. And the Roadster is ready to be driven fast. “This car is not designed only as an elegant convertible, but also as a masculine and extremely dynamic sports car which evokes a powerful driving experience,” says Zagato chief designer Norihiko Harada.

The BMW Zagato Roadster has a very athletic appearance. The Roadster’s unique design with the sweeping hood and long wheelbase put the driver very close to the rear wheels. The driver sits low in the cockpit and the car is “poised and eager, demanding to be driven.” A noteworthy detail of the Roadster is the roll-bar that received its inspiration from an aircraft wing. And the final touch is Zagato’s ‘doppia goppa’ double-bubble roof in the drop-top cover.

Inside, the cabin gets special colors and materials that match the look of the exterior. Brown leather, embroidered “Z” lettering and brushed aluminum are some of the unique treatments found throughout the beautiful interior.

BMW has not released any performance numbers, but since we know the car is based on the Z4 drivetrain with a turbocharged 3.0-liter in-line six cylinder powerplant, it should produce at least 369 horsepower with the overboost feature. The Z4 sDrive35is has a 0-60 time of 4.7 seconds and an electronically limited top speed of 155 mph.

While there has been no word on whether the collaboration will produce a production model, we can only hope that BMW and Zagato will decide to produce a production version of the BMW Zagato Coupe and Roadster that will be sold to the public. For now we’ll just look and dream.