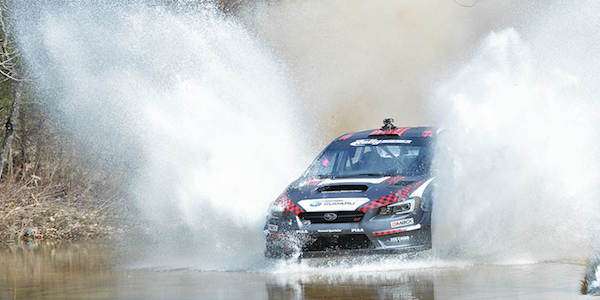 It was an intense battle as Travis Pastrana and Christian Edstrom win Rally in the 100 Acre Wood. Check out the exciting finish.
Advertisement

Subaru doubled their rally motorsports budget, built two new 2016 WRX STIs, and put on a heck of a show for rally fans. Travis Pastrana and David Higgins battled all weekend at Rally in the 100 Acre Wood in Missouri. In the end, it was Pastrana who came out on top with the victory. Until the final stage, the two cars were never more than a few seconds apart during the entire race. It came down to the last water crossing.

Pastrana and Edstrom lead after Day one

It was an intense battle all day Friday as Pastrana and co-driver Christian Edstrom won 6 of 9 stages to end with an 8 second lead over teammates and last year’s champion David Higgins and Craig Drew. The weather was perfect and the stages were fast. Higgins had small boost problems they got figured out but had no shift lights. Higgins said, “Having no shift lights, isn’t such a big deal, but we have new engine rules this year with a bigger turbo restrictor and smaller boost limits; so I am pretty sure I am shifting a little early costing us fractions of a second.”

Pastrana said, “We drove like hell and are very happy to be sitting in the lead but I'm not sure it's going to be enough to hold off the champ tomorrow. Either way, I had a lot of fun and can't wait to put the hammer down and go for it again tomorrow."

For most of the day on Saturday, Pastrana and Edstrom kept a 4 second lead over their teammates. But Higgins and Drew battled back and won 6 of 8 stages. They took a 5 second lead into the final stage and it looked like they would get the win. They then took damage on the Southern Loop’s water crossing and lost valuable time. They finished 1:42.3 behind Pastrana for second place.

Higgins said after the race, “We got the lead on the last two stages and thought the hard work was done, but going into the same water crossing that caused us problems earlier in day, we tried a slower approach and a different line, but unfortunately the impact was worse. We severed a water hose, losing all our coolant, we limped out of the stage.”

After the race an exhausted Pastrana said, “It’s so great to be back in the WRX STI. It’s the fastest car we’ve ever had. It's one of the best feelings to be in a brand new rally car and to be as hard on it as I was with absolutely no technical issues. I couldn't have asked for a better result from everyone at SRTUSA and Vermont SportsCar. I can't wait for the next one!”

Pastrana and Edstrom’s win at Rally in the 100 Acre Wood puts an end to David Higgins' 25 month winning streak and sets up more exciting rally racing to come. Both 2016 Subaru WRX STIs will get needed repairs and head to Portland for the Oregon Trail Rally, April 22-24. Stay tuned.