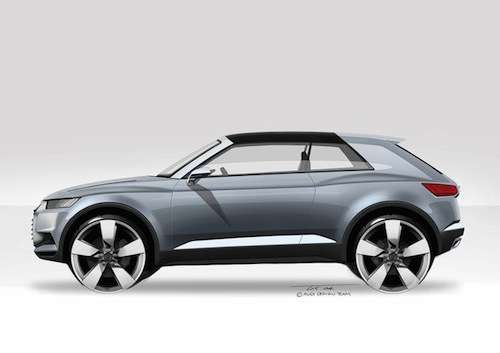 Audi is developing a new “affordable” four-seat city car that is capable of getting 282 mpg and will be based on the A1 platform and Crosslane Coupe Concept styling.
Advertisement

According to sources at Audi, the German automaker is planning a new city car that would be a small four-seat commuter that would get more than 280 mpg. AutoCar has recently received reports from Audi “bosses” that the new small car would be based on the current European model Audi A1. The current A1 is a stylish, quality supermini, but it is expensive. Audi seems to be looking to bring an “affordable” alternative to the small car market that would compete with top-selling compacts like the new 2014 Ford Fiesta that is selling extremely well in Europe.

The new city car from Audi is reported to have exterior styling that will be inspired by the new Audi Crosslane Coupe Concept pictured here that made its debut at the 2012 Paris Auto Show. The new Audi A1 based four-seater is said to be powered by a 1.0-liter engine but would certainly have to be paired with an electrical component to get the reported 282 mpg.

The information comes from Audi’s new head of technical development, Wolfgang Durheimer, who told AutoCar that the new car, known internally as the Audi ‘1.0-litre car’, will be based on the platform of the current A1 and will be an “affordable’ full four-seater that offers all the creature comforts of a normal car, including climate control.”

Durheimer went on to say that the “1.0-litre car” will be able to use a modified version of the A1’s steel platform “because weight is not the biggest engineering challenge with this project”. Audi has been working on a new space frame that would significantly reduce the weight. It was developed with the new Crosslane Coupe Concept. They are able to reduce the weight of the interior as well as the suspension.

Audi developed a manufacturing process that uses an exotic mix of aluminum, carbon fiber-reinforced polymer and fiberglass-reinforced polymer to produce the new "multimaterial" frame on the Crosslane Coupe Concept. The vehicle features a strong but lightweight structure. The reduced weight allows the vehicle to have improved fuel-efficiency over a heavier model.

Audi is still in the beginning stages of developing the new A1 based 1.0-liter four-seater city car, and AutoCar says the new project could be at least three years from production. Audi is certainly moving their design strategy in a new direction, and the all-new city car promises to be the most economical and radically designed car Audi has ever sold. Audi is certainly on the forefront of design, carbon fiber technology and electric propulsion.