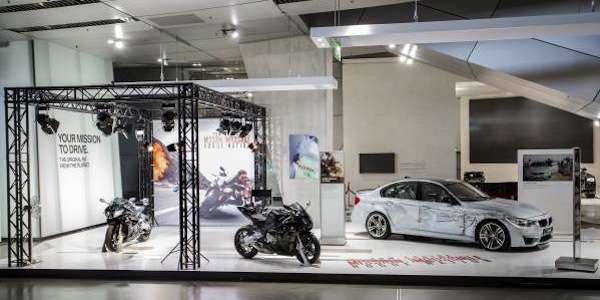 There are two BMW vehicles from the movie MI Rogue Nation being exhibited at the BMW Welt. What other BMW vehicles will you see in the new movie?
Advertisement

"Mission: Impossible-Rogue Nation" starring Tom Cruise starts today in theaters in the U.S. BMW had the German premiere and exhibition with the original film vehicles, the Silverstone II 2015 M3 and Blackstorm metallic BMW S 1000 RR. They can be seen from now until the end of August at the BMW Welt.

There are four other BMW vehicles fans will also see in the new film, the 2016 BMW 340i, the new BMW 7 Series, the BMW X5 xDrive 40e, the first plug-in hybrid production car of the core brand, and the BMW 6 Series Convertible. It’s the M3 and S 1000 RR that will see the most action in the new movie.

The original vehicles from the movie, the new BMW M3 and two BMW S 1000 RR motorcycles are in a special exhibition of BMW Welt and are on a film set from one of the scenes. Tire marks on the floor give the impression of a real chase, while scenes from the film are shown on a screen in the background.

The BMW Welt provides a unique customer experience. BMW opened the Munich customer experience center in 2007 and has established itself not only as a desirable event venue and “gourmet destination”, but also as a popular delivery point for new owners to pick up their BMW vehicles. Every year a growing number of customers from all over the world opt to collect their new BMW in Munich. In 2014, the BMW Welt set a new record of 22,500 vehicle-delivery customers.

BMW says 400 visitors saw the special exhibit on the first day at the BMW Welt. Last week, fans, representatives of Paramount Pictures, and the press were the first preview of the fifth part of "Mission: Impossible" that attended the big world premiere in Vienna.

Now BMW fans can see the original BMW M3 Sedan together with the BMW S 1000 RR from the film that weren’t destroyed on the movie set from the car stunts and chases in Morocco. Until the end of August those interested can visit the exhibition and see two of the original vehicles from the movie at the BMW Welt in Munich, Germany. Admission is free.