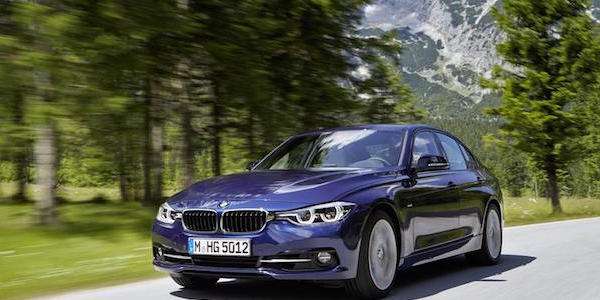 The 2016 BMW 3 Series is the entry-level luxury car bench mark which all others are measured. Why is it still the leader?
Advertisement

There’s 4 reasons why consumers can’t get enough of the BMW 3 Series. The new 2016 BMW 340i and other new 3 Series models are the most researched vehicles on the web in the entry-level luxury car segment. That’s according to Edmunds who says the 3 Series attracted the most car-shopper consideration ​from January 1, 2015 through November 16, 2015 in that category. It’s a 2016 Most Popular on Edmunds.com award winner.

Why is the BMW 3 Series researched most often?

The BMW 3 Series remains the brands top-selling vehicle in their lineup. There’s 4 reasons why consumers keep coming back to the 3 Series models. The BMW 340i is a top model in the lineup because BMW practices Kaizen which is a Japanese word. It’s the value of continual improvement and we aren’t sure who came up with it first, the Japanese or the Germans.

The new 340i gets updates in engines and performance for 2016. It also features excellent fit and finish for an entry-level luxury car. The 3 Series comes with the BMW brands spirited performance and an exquisite ride-and-handling balance unmatched by many higher-priced vehicles. It’s been that way for decades as the 3 Series had been the model that other automakers continue to emulate. Through its evolution, BMW hasn’t changed the 3 Series core values, they’ve just been improved.

BMW has not forgotten what the core values are for the 3 Series that keep the car responsive, compact, fun to drive and connected to the driver. The 340i is the top model because it continues to be improved with upgrades to the chassis and suspension and BMW engineers replaced the three-link suspension setup at each corner with a five-link setup. BMW says the changes stiffened the chassis without any penalty to ride comfort. BMW also fitted a revised electric power-steering system, which is meant to give better feedback and response.

Why is the 3 Series awarded the “Most Popular” by Edmunds?

Edmunds says, “Overall, if you can afford the price of admission, the BMW 3 Series is the standard-bearer in the compact luxury-sport class. Thanks to its wonderfully balanced dynamics, powerful and efficient engine lineup and wide range of configurations, the 3 Series earns our very strong recommendation.”

It’s not a surprise that the 2016 BMW 340i is a top 3 Series model. Edmunds confirms that it’s the most researched vehicle on the web in the entry-level luxury car segment. The 3 Series Sedan is an icon for the German automaker and remains to this day the quintessential BMW.