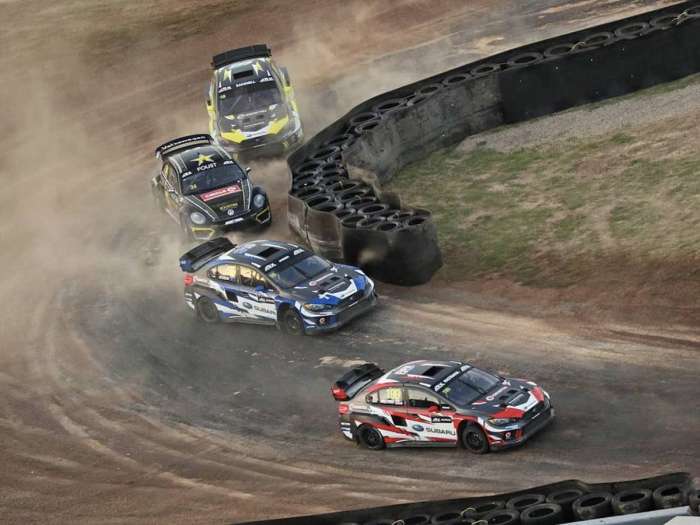 Subaru can’t get it going in the new ARX Rallycross series. See why they missed the podium again.
Advertisement

Subaru Motorsports reports Atkinson won the third qualifying heat race with Pastrana in second. In the fourth qualifier, Atkinson and Pastrana both dropped a spot and finished second and third respectively, while Sandell running in a different group moved up to finish third. Patrik Sandell added “A good drive and I had a strategy to not end up behind people; that worked.”

After the dust had settled talking about the Final at the 812-meter long, purpose-built Rallycross track at Circuit of the Americas, Patrik Sandell explained “We started the final off pretty good when Foust and I took the joker. That gave us a good opportunity to fight with some clean air. Unfortunately things didn't work out and eventually, we ended up in position 5.”

Speed, Block, and Foust get the podium

It was Scott Speed in the Volkswagen Beetle and Ken Block in his Focus RS RX who took one-two in the Final. It was Tanner Foust rounding out the podium in third place. Travis Pastrana said, “That was a heck of a final! I was really hoping we could beat Ken when he took the joker, but I just didn't have it in the end. Overall, it was super close and the car felt great. I had a bit of trouble early in the day, but we made it work.”

Pastrana drove the best race of the three WRX STIs and finished the Final in fourth, while Chris Atkinson had an early flat tire and ended up in sixth. Round three of the ARX series goes to Trois Rivieres August 4-5 in Quebec, and Subaru has not announced which drivers will compete. Subaru is planning something in the future for the 2018 WRX STI Supercars but has not revealed what they are up to. Sandell said after the Final, “The car has come a long way and I'm excited for a few things we have coming in the future.” Stay tuned.