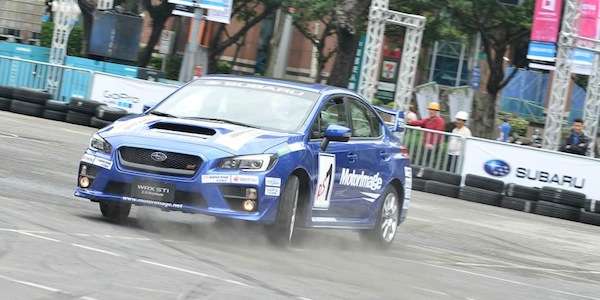 The 2015 Subaru WRX and WRX STI made its debut in Taiwan this weekend. But it came with a thrilling drifting show.
Advertisement

What better way to make the debut of Subaru’s two latest performance sedans than to show what they can do with someone who really knows how to drive the sports cars. Subaru brought a professional driver to the Taiwan debut of the 2015 Subaru WRX and WRX STI this weekend to thrill fans. At the Taipei XinYi area A13 parking lot, performance fans were treated to a thrilling performance from professional driver Russ Swift. The world-renowned precision driver performed his signature stunts in the new WRX and WRX STI.

Russ Swift showed how the new-generation WRX and WRX STI with upgraded suspension will perform in extreme situations. He drifted the two performance sedans around a course and slid the cars into tight parking spots with precision. He also demonstrated the new Subaru XV Crosstrek and how it will perform on two wheels.

The all-new 2015 Subaru WRX and WRX STI make their debut in Taiwan with
enhanced performance and a new redesign for the fourth-generation model. Swift shows that Subaru’s latest performance sedans present an even more amazing driving experience.

What do the new WRX and WRX STI bring to Taiwanese performance fans?
For 2015, the Subaru WRX gets upgrades to the suspension and chassis. The new-generation WRX features a new torque-vectoring system that supplements the standard Symmetrical All-Wheel Drive system. The Torque vectoring improves cornering speeds and handling in the curves. WRX also comes with a new and stiffer chassis, larger brakes, and performance-tuned suspension.

Who is Motor Image in the video below that you see on the side of the new WRX and WRX STI? Motor Image is the authorized distributor of Subaru automobiles in Singapore. Headquartered in Singapore, since 1986, the company has set up vehicle sales and distribution networks in Cambodia, Hong Kong, Indonesia, Malaysia, Philippines, Southern China, Taiwan, Thailand and Vietnam for Subaru.

Motor Image has partnered with Fuji Heavy Industries Ltd for the local assembly of Subaru vehicles in Malaysia. Signed in July 2011, the agreement leverages Tan Chong's existing assembly facilities for production of Subaru cars for marketing and distribution in Malaysia, Thailand and Indonesia.

The all-new 2015 Subaru WRX and WRX STI performance sedans have arrived in Taiwan and are in Subaru showrooms now.