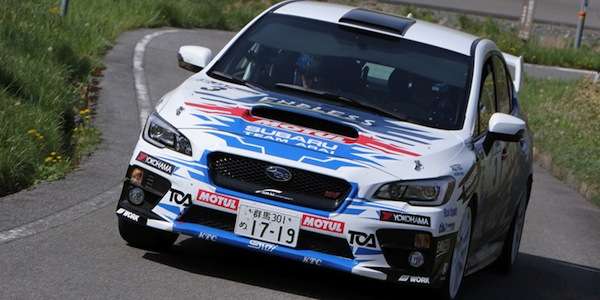 2015 Subaru WRX STI monopolizes the podium at All Japan Rally

The 2015 Subaru WRX STI finished 1-2-3 in the second round of the All Japan Rally Championship. What changes did STI make to the new rally car?
Advertisement

Subaru Motorsport, directed by Subaru Tecnica International (STI) has an expanded race agenda this season with the 2015 WRX STI. The motorsport division of Subaru will run the new generation STI at the Nurburgring 24-hour endurance race, WRX STI in the WRC and ERC, and the all-new 2015 Subaru WRX STI in the Rally America and Global RallyCross series. This year they are also running the new 2015 STI rally car in the All Japan Championship series.

This past weekend, the 2015 WRX STI had a monopoly on the podium at the Kumakogen, Japan rally. The 2015 STI finished 1-2-3 in the second round of the All Japan Rally Championship. The course was wet as the spring rain soaked the course and it likely helped the STI that comes equipped with Subaru’s excellent all-wheel-drive system. The drivers had to deal with loose gravel, mud and slick road surfaces all weekend.

Subaru has a long and storied history in Rally motorsports that continues today. What they learn from motorsports helped Subaru develop the technology for the 2015 WRX STI production performance car. STI has been involved in motorsports around the globe since the 1990s when they raced the 96 Gr-A GR8 4 door Impreza San Remo vehicle. The next vehicle was the WRC 1998 2 door GC8 Impreza model that was the forerunner of the WRX performance car.

Motorsport is a big part of what Subaru does around the globe and it’s even bigger in the home country of Japan. At Subaru headquarters, STI unveiled all the 2015 Japan motorsports cars along with their drivers to engage their fans. Subaru brings the new 2015 WRX STI All Japan Rally Championship race car to the new Subaru Ebisu showroom for the...read more.

For the 2015 All Japan Championship series, STI has given the rally car significantly more torque and less horsepower than the stock engine. This is done to get the car moving through the course quickly at the lower speeds. The new 2015 STI’s 2.0-liter engine uses a combination of direct injection, high compression (10.6:1), Subaru Dual Active Valve Control System (D-AVCS), a twin-scroll turbocharger and an intercooler to get improved performance. The production 2015 WRX STI 2.0-liter gets a broader torque curve and peaks at 311 lb.-ft. at 4,400 rpm. The Rally car gets a much lower torque curve and peaks at 3,000 rpm for more low-end power.

The upgrades to the 2.0-liter 2015 Subaru WRX STI powerplant seem to be paying big dividends on the rally course as Subaru Tecnica International gets a 1-2-3 podium finish at the All Japan Rally. Will performance fans in North America see the 2.0-liter boxer engine the U.S. spec STI?