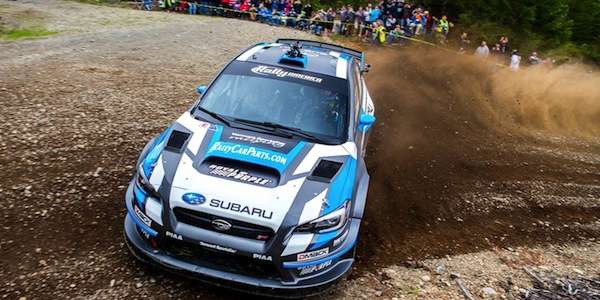 SRT USA wins the 2015 Olympus Rally this weekend in the new 2015 Subaru WRX STI. How many consecutive victories does Higgins and Drew have?
Advertisement

This win marks the fourth consecutive victory in the 2015 championship season and the tenth consecutive Rally America win for David Higgins and co-driver Craig Drew. This past weekend, they pulled off another win at the 2015 Olympus Rally in the new 2015 Subaru WRX STI.

Higgins and Drew held the lead of the fourth round of the 2015 Rally America Championship after day 1 of Olympus Rally competition. SRT USA won all but one stage on Saturday and were able to establish a comfortable lead of 2:30 over the second place FY Racing’s Adam Yeoman and co-driver Jordan Schulze in their 2007 Subaru WRX STI.

L’Estage and Ockwell were at Olympus Rally for a shakedown

A flat tire cost SRT USA a perfect record for the day. Subaru Rally Team Canada’s Antoine L’Estage and Alan Ockwell driving another 2015 Subaru WRX STI won that stage. L’Estage and Ockwell were at Olympus Rally to give their new 2015 STI a proper shakedown before the next round of Canadian competition. The team did not present their timecard for final tabulation at the end of the day and were scored as a DNF. “We’re happy to be here and we like the Rally America events, but we’re here this weekend as a real-world test and we don’t want to disrupt anyone’s championship,” said L’Estage.

The 2015 Subaru WRX STI that SRT Canada and L'Estage competed with was a completely new vehicle that was “painstakingly prepared” and built from the ground up by Rocket Rally Racing for the past two months to get ready for the...read more.

Subaru Rally Team USA had a bit of drama on the second day and saw most of their advantage melt away with a blown turbocharger on the STI. Higgins and Drew were eighth fastest on Sunday’s third stage, and sixth on the fourth stage, while FY Racing’s Yeoman and Schulze kept the pressure on the dominant 2015 STI.

The SRT USA techs made repairs during the half-hour service on Sunday returning the team’s Subaru STI to full power. At the end of day 2, Higgins and Drew were able to keep their lead and won their fourth consecutive victory in the 2015 championship season in the new 2015 Subaru WRX STI.

Subaru dominated the 2015 Olympus Rally with SRT USA winning the event in the 2015 Subaru WRX STI, FY Racing’s Yeoman and Schulze finished 1:49.3 minutes behind in their 2007 Subaru WRX STI and Nick Roberts and Rhianon Gelsomino 4:59.1 minutes behind the leaders in their 2013 Subaru Impreza WRX STI. Next up is the Susquehannock Trail Performance Rally June 5-6 in Wellsboro, Pennsylvania.

Tesla Contemplates A New Strategy for China Retail even As Sales Boom
Jay Leno on Elon Musk & EVs: “I Think He Should Get ... Credit"
END_OF_DOCUMENT_TOKEN_TO_BE_REPLACED