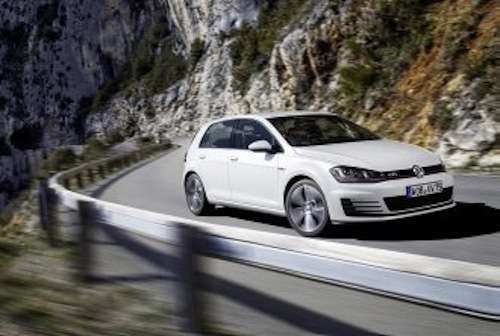 2014 VW Golf GTI has double the power of first GTI

The new seventh generation 2014 Volkswagen Golf GTI is launching next month and it’s lighter, faster and more fuel efficient than ever before.
Advertisement

There are two reasons that VW has produced nearly 1.9 million Golf GTI cars around the globe since 1976. The very first Golf GTI set the standard for dynamic performance that was more precise than any other compact car. It offered good performance with an agile chassis for sporty driving. The GTI featured a red stripe around the radiator grille, a black border around the rear windscreen, a sport steering wheel, a golf ball as a gear shift grip, and sport seats with a classic tartan design. And performance fans could get all this at an affordable price.

What can we expect for the new seventh-generation VW GTI? It starts under the hood of the sporty compact. The new 2014 GTI has 100 percent more power than the first model produced in 1976. The engine of the first 1976 Golf GTI produced 81 kW / 110 PS. Now, the seventh generation Golf GTI sends at least 162 kW / 220 PS to the front wheels, which is exactly double the power of the first Golf GTI.

The new 2014 GTI features a new 2.0-liter turbocharged direct injection engine. The powerplant gets a number of new upgrades that give it increased power. It has a completely newly developed cylinder head, water-cooled exhaust gas circulation loop to the turbocharger, and variable valve timing with dual camshaft adjustment. The engine improvements not only increase performance, but also improve fuel economy and lower emissions on the new GTI.

The GTI with a six-speed manual gearbox achieves the best fuel mileage at 6.0 l/100 km (CO2: 139 g/km). The combined fuel consumption of the Golf GTI was reduced by 1.3 liters or 18 per cent compared to the previous model (155 kW / 210 PS). GTI equipped with the six-speed dual-clutch gearbox (DSG) achieves 14 per cent lower fuel consumption that the outgoing model.

Contributing to more agile performance and increased fuel economy of the new Golf GTI is the lower weight of the performance compact. Volkswagen engineers found ways to reduce weight from 1,393 kg to 1,351 kg (42 kg savings). They also improved the vehicles aerodynamics and it’s aerodynamic drag (cD x A) shrank from 0.73 m2 to 0.70 m2. The new standard Stop/Start system of the GTI also helps improve fuel economy.

Two other factors contribute to the fuel savings. Volkswagen says the new 2.0-liter engine gets substantially higher torque of 350 Nm instead of the 280 Nm of the previous model. This allowed VW to reduce gear ratios for lower engine speeds, adapting them to the engine’s lower rev levels. And engineers also made internal engine modifications including a new and innovative thermal management system in the 2.0-liter TSI.

How does this translate to performance?

The performance nature of the new 2014 Volkswagen Golf GTI is seen with its red-painted brake calipers peaking through the 17-inch “Brooklyn” GTI wheels. It also sports twin chrome tailpipes, and a lowered sport suspension for extra performance in the corners. It will arrive at dealers starting in May, with advance sales already begun in Europe.