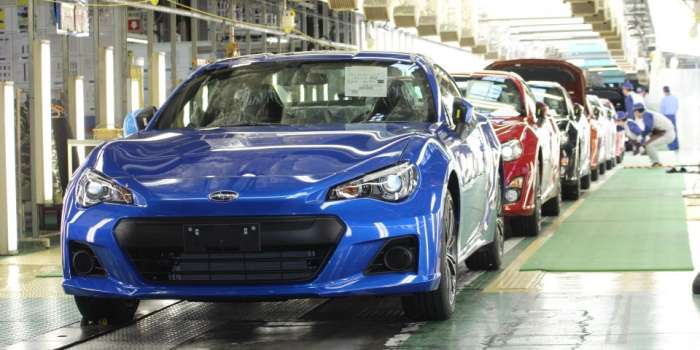 The 2014 Subaru BRZ sports coupe is now available for sale in the brand’s authorized retail network in Australia for the first time.
Advertisement

2014 brings new things to Australian driving enthusiasts. The 2014 Subaru BRZ will be available in showrooms for the very first time. Up until January 1, 2014, the two-door sports coupe was sold exclusively online in Australia due to strong demand around the globe, especially in the U.S. market. The Japanese automaker had limited production availability in their Japan factory and has been struggling to keep up.

Subaru also has to build the Toyota GT 86/Scion FR-S at the same production facility, but has been able to increase production in recent month’s. The new 2014 BRZ is now available throughout all authorized Subaru dealers in Australia. When the car first launched in July, 2012, the initial allocation sold-out after just three hours of going “live” on the web. Subaru has continued with the online sales until today.

Subaru Australia will sell the 2014 BRZ for the same price in showrooms as they do online. The recommended National Driveaway Price (NDP) for the six-speed manual is $37,150 and for the six-speed automatic is $39,730 NDP. Since the sports car has been offered online, Subaru has sold 1800 BRZs in Australia since its initial launch. The car is both affordable and fun to drive.

Sales should increase with the coupe being immediately available for buyers to see and drive. Senior went on to say, “It’s great for our customers, because they have the choice of buying online at a driveaway price, or using the more traditional dealer method. It’s also great for dealers in our network, which have the opportunity to display one of Australia’s most popular sports cars in their showroom.”

BRZ has received much recognition since it first arrived on the world scene in 2012 and has many awards around the globe. Now BRZ fans in Australia can celebrate the cars arrival in showrooms. Next, we’re hoping for a BRZ with added hp and the STI badge. Stay tuned to Torque News for the latest BRZ news.