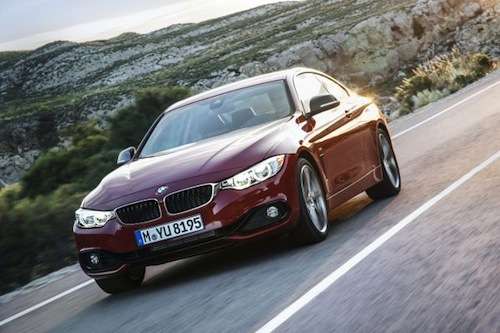 The all-new 2014 BMW 4 Series Coupe is a new generation coupe for the German brand, marks a new era of performance and sports appeal and sends a powerful message to Audi and Mercedes-Benz.
Advertisement

The launch of the new BMW 4 Series Coupe marks the arrival of the latest generation of BMW’s sporty premium mid-size Coupe but more importantly, it sends a message to Audi and Mercedes. It says BMW is advancing their global image as the leader in the premium luxury performance segment. The new 4 Series Coupe sends a strong message that they are not about to give up the top spot in the premium luxury performance segment easily. Both Audi and Mercedes have made it clear they want to be number one, but it will be a tough fight for them to get there. The champ has just rolled out a new coupe that says a lot about the German automaker from Munich.

One of the sportiest series-produced cars in the BMW range

The 4 Series Coupe has a lower suspension that brings the car’s center of gravity down to below 20 inches (500 mm), giving it the lowest center of gravity of any car in the current BMW line-up. As a result, the new BMW 4 Series Coupe will be one of the sportiest series-produced cars in the BMW range. The way to stay on top is to keep the pedal to the metal in style and performance. It’s hard to improve on their award-winning engines and the new BMW 4 Series Coupe will be offered as both a 428i, featuring BMW’s award-winning TwinPower Turbo 2.0-liter 4-cylinder and as a 435i with the multi-award winning Twin Power Turbo 3.0-liter inline six.

The 3.0-liter BMW engine features an aluminum crankcase and develops 300 hp and 300 lb-ft. of torque. The multi-award winning six-cylinder engine allows the new BMW 435i Coupe to sprint from 0-60 in just 5.3 seconds with the six-speed manual gearbox, and only five seconds with the 8-speed automatic. The 435i has an electronically limited 250 km/h (155 mph) top speed, when equipped with performance tires.

Both engines will come mated to a standard eight-speed sport automatic or six-speed manual gearbox. Both will also be offered with a choice of rear-wheel drive or with optional xDrive, BMW’s intelligent all-wheel drive system. Customers can choose the Sport or Luxury Lines as alternatives to standard specification. The high-performance M Sport will be able for ultra-performance enthusiasts.

New elements of the BMW 4 Series Coupe over the outgoing 3 Series Coupe are the Air Breathers, which are positioned rearwards of the front wheel arches to reduce drag. BMW engineers made sure the new BMW 4 Series Coupe will be defined by its sporty driving dynamics and aesthetics. It will also feature a new sophisticated chassis technology, with near-perfect 50:50 weight distribution, fine-tuning in the wind tunnel, and lightweight construction all contribute to meet that goal.