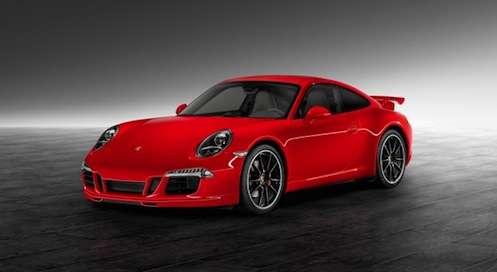 2013 Porsche 911 gets faster with Exclusive performance

Porsche Exclusive is offering a performance enhancement kit for the 2013 Porsche 911 Carrera S with more power and more excitement.
Advertisement

As if the 2013 Porsche 911 wasn’t fast enough before, Porsche Exclusive has released details of a new Power enhancement kit for the 2013 911 Carrera S that bumps up the horsepower of the 3.8-liter boxer engine from 400 horsepower to 430. In stock trim, the Carrera S is an impressive sports car, but Porsche seems to always leave room for improvement. The new Powerkit that is being offered is more than just a few bolt-on intake and exhaust items and the factory upgrades are fairly extensive.

Extensive changes to the engine

Starting with the engine, Porsche has increased the 3.8-liter engine’s ability to breathe by redesigning the cylinder heads and camshaft for greater volume of air and longer lift of the valves. Any tuner knows this is the first place to start if you want to increase horsepower. Along with the mechanical changes, Porsche also made modifications to the electronic engine management system to maximize the engines new capabilities. The combination of the two gives the boxer engine a seven percent increase in power.

Porsche engineers also gave the 911 Carrera S Powerkit a new variable resonance intake system design with six air flaps and an additional resonance flap to increase the powerplants ability top breathe better. Next, they added an additional center radiator for increased cooling capacity to expend the heat on the track. And to remove the extra exhaust from the high-performance engine, a high-flow sports exhaust system was added to the package. Dynamic engine mounts were also included to help balance the engines extra power. To round out the Sport Chrono package, a titanium colored engine cover with carbon inlays provides a visual Powerkit highlight to the engine compartment.

Aerodynamic improvements on the outside

The Sport Design package offered from Porsche includes a new front apron and extends lower and features the open air intakes for better air flow into the engine compartment. A special front spoiler lip with additional air intakes is also part of the aero kit. A fixed rear “ducktail” spoiler is also available, and the top upgrade is the Aerokit Cup with an additional fixed rear wing over the standard rear spoiler.

Visual enhancements can be made to the 911 Carrera S by adding tinted privacy glass for the side and rear windows (not available in the U.S.) and the Exterior package offers various components in body color. Porsche Exclusive also offers special interior treatments such decorative trim ranging from brushed aluminum to carbon trim appointments.

The new Powerkit from Porsche Exclusive brings some real-world performance increases to the 2013 Carrera S. When equipped with the power performance kit, the 911 Carrera S Coupe will go from 0-60 in 3.8 seconds with PDK in Sport Plus mode. The sports cars maximum top-track-speed has also increased by three mph to 191.

The press release from Porsche says the enhanced power has not affected fuel economy: fuel consumption values in the New European Driving Cycle (NEDC) are unchanged despite the seven per cent increase in power. EPA fuel economy figures have not been calculated for the U.S. yet.

The Powerkit will be available for the 2013 Porsche Carrerra S beginning in the early fall of 2012 in the U.S. Pricing for the performance upgrades will be announced closer to launch. It’s a good time to be alive if you a fan of performance vehicles.

Tesla-Funded Research Reveals One of The Biggest Mysteries of EV Battery
Tesla Tesla Buyer Nets a Whopping $12,000 Discount After Asking for Reduction
END_OF_DOCUMENT_TOKEN_TO_BE_REPLACED