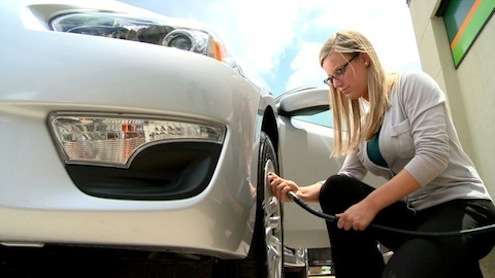 Nissan has devised an innovative new tire-inflation system which lets you know when the PSI in your tires is at the right point, and will debut on the 2013 Altima.
Advertisement

Most drivers don’t pay much attention to their tire pressure, and it could be a potential hazard that may endanger driver’s lives. But Nissan has just announced the "Easy Fill Tire Alert" system on its 2013 Altima that will make it easy for owners to know when they have just the right amount of air when they are filling their tires. Nissan will first introduce the new "Easy Fill Tire Alert" system on the 2013 Altima, but it will be standard equipment on all of its 2013 model year vehicles.

While tire pressure monitors are not new, this system designed and developed by Nissan takes the technology to a whole new level. The car will first alert you when your pressure is low from a display on the dash. The driver can then pull into a refill station and fill the tire that is low. While you are filling the tire with air, the four-way flashers will blink to let you know that air is going in, and when you hit the correct PSI, the horn will chirp one time to let you know to stop. It will also warn you if the suggested PSI level is exceeded by the flashers blinking faster and honking the horn three times.

The new tire inflation system will eliminate the need to read the tire pressure placard on the door jamb or stand on your head to try to find the maximum recommended pressure on the tire. "I think a lot of people probably don't think about tire pressure. I didn't, and so this is a good system to have," said Nissan customer Evan Galin.

A new federal study shows underinflated tires triple drivers risk of an accident, and optimal tire pressure will also ensure the car gets the best fuel economy. Most commuters overlook tire pressure as a way to save fuel, and most only have it checked when they change their oil every 3000 miles. Most of us would have to admit we are guilty of neglecting our tire pressure. But this new system from Nissan will help the average consumer keep the pressure at the correct level, which benefits both car and driver.

"It's one of those simple slap your forehead moments, as to why someone has not thought of it before," said Vishnu Jayamohan with Nissan Product Planning and Advanced Strategy. If you get a low pressure tire warning, you're not left wondering if you have a serious condition that requires you to stop immediately, or if its something that allows you to drive home or to the nearest filling station and then fill up," said Jayamohan.

While Nissan actually introduced this feature beginning with the 2011 Quest minivan, it will now be standard across the Nissan lineup. Because most drivers don’t even think about tire pressure despite its importance for both fuel economy and on-road safety. The "Easy Fill Tire Alert" tire system is one of those features that we will look back on a wonder how we lived without it for so long.

Check out the informative video below.