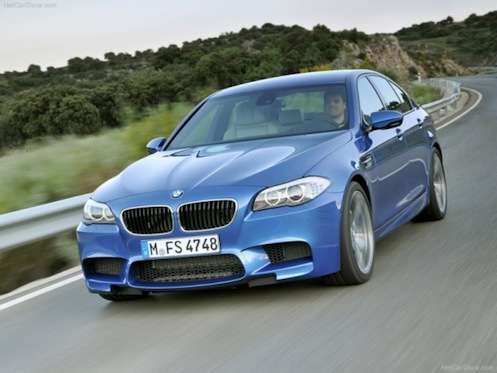 The 2013 BMW M5 “Bullet” is a must-see video from BMW depicting the car doing its impression of a speeding bullet.
Advertisement

The 2013 BMW M5 has been described as being discreetly wicked. The new car is supposed to be a mid-size sports sedan but it might as well be an exotic sports car. In a new video commercial put together by BMW of Canada, the 2013 BMW M5 is shown doing a very good impression of a speeding bullet. The short two minute clip is a brilliant way to show off not only the speed of the M5, but also the artistic beauty of the sports car.

The well-crafted video is shot in what looks very much like the Bonneville Salt Flats in Utah. And what better place to film the “bullet” video than a place where high-speed racers have gathered to test some of the fastest vehicles on the planet. There is what appears to be salt building up on the blue M5’s front fender as the car speeds fast toward its targets.

Shortly after getting "shot" out of a tube fashioned to look like a gun barrel, the 2013 M5 gets up to its artificially limited top speed of 155 miles per hour. The high-performance sports car hurdles its way toward a series of targets starting with a gigantic glass apple that is shattered to pieces when it gets hit. The blue M takes aim at three huge water balloons and takes them out one by one in slow motion. The super car isn’t done yet and speeds toward the final bullseye, which it hits dead-on and destroys.

BMW uses a turbocharger that they call “M Twin Power,” where the two twin-scroll turbochargers are placed within the “V” of the engine. The M Twin Power turbo package also includes a first-ever Valve-tronic and Vanos variable valve-timing system in the 4.4-liter V-8. The performance sedan also uses the latest high-precision direct fuel injection and a unique new cross-bank exhaust manifold. The new 2013 M5 won't leave you wanting for more power.

Make sure you brace your head and neck before watching the 2013 BMW M5 video. The driver steps on the accelerator and launches the new M5 out of the gun and speeds toward the targets. The forward surge is violent as you hear the 560 horses coming to life.