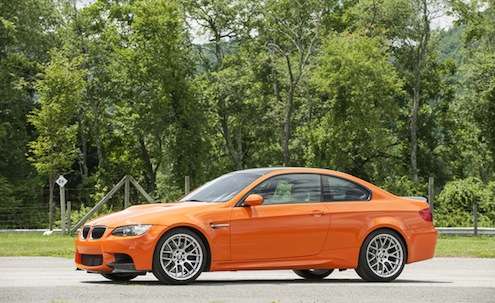 BMW announced the arrival of the 2013 M3 Coupe Lime Rock Park Edition that will celebrate the longstanding relationship with the Lime Rock Park racing circuit.
Advertisement

BMW announced the 2013 M3 Coupe Lime Rock Park Edition today that will commemorate the long term relationship between BMW and the famed Lime Rock Park racing circuit. The race circuit is located in northwestern Connecticut and has been continuously operated since its opening in 1957. Lime Rock Park is one of America’s most recognized road racing venues.

The track is 1.5 miles in length, encompassing seven corners and more than seven stories of elevation change. The track is considered one of the most beautiful and challenging to drive in the world, constructed in a natural valley in the Berkshire Mountains of extreme northwest Connecticut. It is home to the American Le Mans Series and Grand-Am with their own stars and cars that are writing the history.

All 200 cars will be painted in rare Fire Orange on the outside, and features Anthracite and Black cloth seating with Nappa leather trim inside. BMW says the popular Competition Package is fitted, and the M3’s signature carbon fiber composite roof panel will be retained on all copies produced.

Other equipment includes a lightweight inconel-titanium exhaust muffler, carbon fiber front and rear aerodynamic aids, and an Anthracite Alcantara-covered, flat-bottom steering wheel. Every M3 Coupe Lime Rock Park Edition will feature a numbered plaque located on the center console, a unique decal on the left-rear quarter window, and a certificate of authenticity.

The car gets approval from a professional driver

Race driver Bill Auberlen, who has been racing BMW’s for 17 years was the first to evaluate the prototype of the M3 Coupe Lime Rock Park Edition on the famed 1.5-mile circuit. Auberlen described the new car: “The M3 Lime Rock Park Edition may be as close to perfect as you can get, right off the production line. From its great color to the flawless manners it showed on the track, for the first time I can say I might not change a thing.”

Track owner Skip Barber described the BMW M3 Coupe Lime Rock Park Edition, “when equipped with the six-speed manual, is geared perfectly – and I mean perfectly – for the track. I agree with Bill: I wouldn’t change a thing.”

Deliveries of the all-new 2013 M3 Coupe Lime Rock Park Edition are planned to begin this September. But you better hurry if you want one of the Fire Orange 200 limited edition coupes.