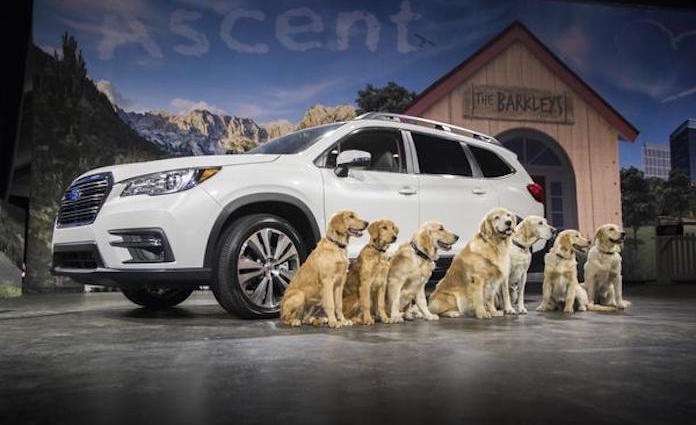 Subaru will score big with families on Super Bowl Sunday. The Barkley dog family is back this time with the all-new 2019 Subaru Ascent.
Advertisement

Subaru will get help from the Barkley dog family riding in the new Ascent 3-Row vehicle as they launch the Super Bowl Sunday ads. Brian Cavalucci, national advertising manager for Subaru of America, says this is the eighth consecutive year for the automaker being featured at the Puppy Bowl on Animal Planet.

A 30 second Super Bowl ad will cost more than $5 million this year according to Sports Illustrated, so it’s understandable why Subaru would choose another channel to advertise the new Ascent family vehicle. Subaru knows many of their customers love dogs and they are capitalizing on this again in 2018. Subaru says, eight out of 10 Subaru owners are pet owners. Even if you don’t own a Subaru, the commercials are good.

The national television spots are created by ad agency Carmichael Lynch on behalf of Subaru of America. They created the “Dog Tested. Dog Approved” campaign that has been a huge success for the brand. The ads should score big with families in two ways, as they pay tribute to the scenarios Subaru drivers find themselves in with their own families, while also showcasing the brand’s longstanding love of pets.

Subaru even used the Barkley dog family at the launch of the all-new Subaru Ascent family vehicle when it was unveiled at the LA Auto Show. Tom Doll, COO of Subaru of America announced the new 3-Row family hauler as the Barkley family drove in the car onto the stage and then piled out to pose for the media.

Cavalucci says, “We have a long-term commitment to pets and animal welfare, so the Barkley family has been a natural way for us all to bond over this shared-love of pets. Plus, they’re fun and a bit of whimsy. We’ve all imagined what our pets ‘alter egos’ would be; the Barkleys is living that out loud.”

Elon Makes a Cybertruck Statement With an Action, But Quiet in Words
Tesla's Record Month in China: Doubled Registrations in March 2021
END_OF_DOCUMENT_TOKEN_TO_BE_REPLACED