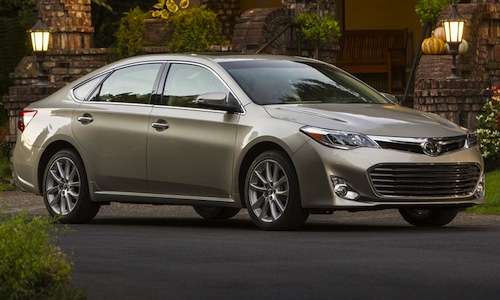 Despite being immensely popular amongst the older car buyers, Toyota has opted to revamp the 2013 Toyota Avalon in several ways that may turn off elderly drivers, says Consumer Reports.
Advertisement

The Toyota Avalon has carved out quite a niche for itself amongst aging motorists since first being introduced in 1994. While not exclusively owned by older drivers, the present median age of an Avalon owner is 64 years old. In an attempt to broaden the appeal of the 2013 Avalon, Toyota has equipped the all-new full-size sedan with several features that will appeal to a younger demographic like increased driver connectivity and a sleeker exterior. Although new tech gadgets and a refined exterior may entice younger drivers, Toyota may be alienating elderly motorists, according to Consumer Reports.

The consumer watchdog site contends that the 2013 Toyota Avalon’s inclusion of new technology may confuse older drivers. Not only does the vehicle tout Bluetooth connectivity and a touchscreen, it also contains Entune, a fully integrated suite of navigational and multimedia apps. While increased connectivity may be in high demand amongst Gen X’ers, Baby Boomers aren’t exactly clamoring for new technologies.

Aside from complicated controls, the Avalon’s traditional ride quality has transitioned from comfortable to fun, according to Consumer Reports. The 2013 Toyota Avalon’s suspension “crashes” into every bump, argues the consumer site. This is primarily thanks to the Avalon’s new standard 18-inch tires, which have been added to catch the eyes of younger car buyers. That said, the hybrid version exhibits far better handling due to its 17-inch tires, says Consumer Reports.

Lastly, the 2013 Toyota Avalon features a drastically different exterior compared to past models. Unlike previous Avalons, the new model contains a two-level grille, sloping hood and sleeker headlights. Additionally, the vehicle’s rear is more narrower and less metallic. Not to mention, the 2013 Avalon touts a more integrated trunk. That being said, a revamped exterior is not as likely to deter older drivers from purchasing a new Avalon compared to confusing controls.

Although elderly owners are an established demographic for Toyota, they make up just 11 percent of all drivers, according to the Insurance Institute for Highway Safety. Not surprisingly, older drivers (classified as 70 and older) drive approximately 42 percent fewer miles than drivers 35-69 years old.

First introduced as a replacement for the discontinued Toyota Cressida, the Avalon is full-size front-wheel drive sedan, powered by a V6 engine. Once an immensely popular sedan, the Avalon’s sales have fallen in recent years. Although Toyota sold a record-breaking 104,078 Avalon vehicles in 2000, it has not sold more than 30,000 vehicles since 2008.