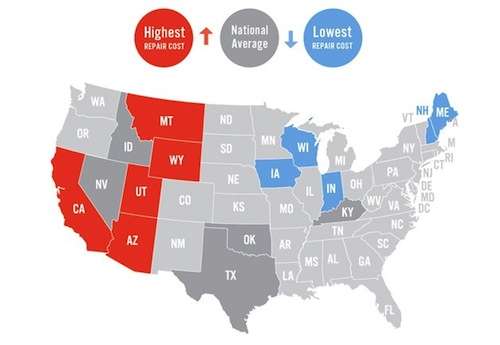 Where does your state rank on the new CarMD study?
Advertisement

Residents of Wyoming may enjoy the state’s expansive mountain ranges and scenic views, but a new study shows that its citizens are subject to the highest auto repair costs in the country. CarMD, a manufacturer of automotive diagnostic tools, based the study on 2011 repair costs incurred by motorists in all fifty states. CarMD examined over 160,000 repairs made on vehicles with “check engine” light issues to gather their research. CarMD found that the average repair cost in 2011 was $333.93, including $215.32 for parts and $118.61 for labor. The state that paid closest to the national average was Texas at $333.75.

"Each year, CarMD taps into our Vehicle Health Index repair database to monitor trends, including state-by-state and nationwide auto repair costs," said Art Jacobsen, vice president, CarMD. "We are encouraged to see overall repair costs trending down this year but recognize that drivers are still putting off small repairs such as spark plugs and oxygen sensors that can quickly turn into more serious problems. With the higher cost for repairs in popular western vacation destinations, our data illustrates the need for summer travelers to make preventative maintenance and vehicle safety checks paramount in their road-trip preparation."

As for the most expensive states, Wyoming led the way with an average repair cost of $389.18, roughly 17 percent higher than the national average. Interestingly, Wyoming contains two of the top 10 most visited national parks in country. Researchers cite Wyoming’s harsh weather and high altitude as primary reasons for vehicle repair needs. Second on CarMD’s list was Utah with an overall repair cost of $378.54, followed by California with $367.86. Rounding out the top five were Montana and Arizona, with $364.29 and $362.65 in repair costs respectively.

While the states with the highest repair costs are all out west, the least expensive states hail from the Midwest and Northeast. Indiana, The Hoosier State, had the lowest car repair costs in 2011 with an average cost of $283.95. The tight race for runner up on CarMD’s list was won by Maine with an average cost of $289.56. Wisconsin (289.90) and Iowa ($289.91) finished a close third and fourth, while New Hampshire ($292.66) finished fifth.

Interested to see where your state ranks? Click HERE to check out the repair costs of all 50 states.