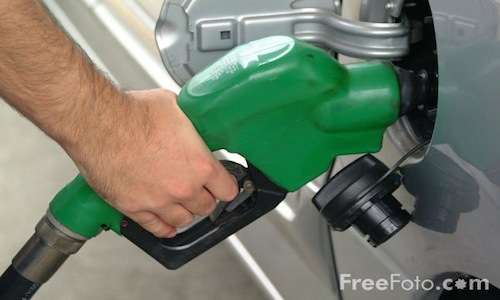 Obesity isn't only negatively affecting our health, but also our wallets when it comes to paying at the pump.
Advertisement

It’s no revelation that Americans are fat. Not surprisingly, its obesity epidemic comes with numerous side effects. Aside from the typically mentioned health risks like diabetes, heart disease, hypertension and stroke, there are also economic ramifications associated with America’s expanding waistlines. A new Atlantic article has examined an often overlooked by product of obesity: gasoline consumption. As might be expected, obese drivers use more gas. America’s current obesity rates translate to roughly one billion gallons more gas today than as in 1960, when the citizenry was more trim and healthy. The United States uses an additional 39 million gallons of fuel annually for each additional pound of passenger weight.

The results are based on a 2006 study on obesity rates and driving habits in the US. In 2006, over a quarter of the population in 21 states were obese. Since then, the percentages have increased to 35 states. In fact, more than one third of the population is considered obese in 12 states. Though the 2006 obesity/driving study is the most recent of its kind, it is likely that Americans are wasting even more than a billion gallons in gas due to its increasing obesity statistics.

A 2012 study conducted [email protected] recently concluded that commute time is partly responsible for increasing obesity rates in the US. Specifically, every 10 minutes of commute time not only raises obesity risks, but also high cholesterol and neck/back pain. Additionally, car dependency has been on a steady increase in recent years, which does not bode well for drivers looking to shed some pounds.

For those interested, the most obese states are Mississippi, Alabama, West Virginia, Tennessee, and Louisiana, respectively. So what is the leanest state in the United States? Well, that would be the fit people in Colorado. Unfortunately, over 18 percent of Colorado citizens are still considered obese.

Based on current gas prices, obesity is costing Americans an additional $3.87 billion at the pump each year.